« Who’s on First? Characteristics of First-Time Homebuyers | Main | Is the Recent Tax Reform Playing a Role in the Decline of Home Sales? » 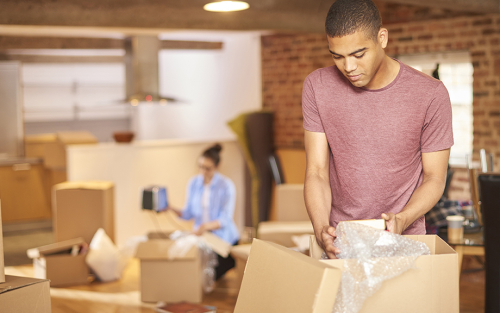 One advantage of the New York Fed’s Consumer Credit Panel data is that it enables us to continue to follow a household after the payoff of its first-time mortgage, which provides a more detailed look at homeownership sustainability. The most obvious case when homeownership was not sustainable is if the household defaulted on its first-time mortgage. Households who go through a default and foreclosure will likely not be able to transition back to homeownership for many years, and certainly are not able to accumulate wealth during their period of homeownership. This difficulty reflects the fact that the household lost its home equity and will suffer a serious deterioration in its credit rating.

At the other end of the spectrum, first-time borrowers who pay off their mortgage(s), move and remain homeowners in their new location demonstrate sustainable first-time homeownership. For our purpose, we do not continue to track households to see if they successfully pay off their trade-up mortgage. The next case of a sustainable first-time homeownership is when the household continues to live in the same residence paying down their initial (or subsequent refinance) mortgage. The longer the household has lived in the residence, the stronger is the case to classify this outcome as an example of a sustainable homeownership.

An intermediate case is when the household successfully pays off its first-time mortgage(s), but transitions back to renting. Here, we exclude brief rental periods that can arise between homeownership experiences. For our sustainability scorecard, we identify those first-time buyers who return to renting for at least three years. We classify these as examples of first-time homeownership that was not sustainable. However, in this scenario, the household’s credit did not suffer damage due to a default and foreclosure. As such, these households likely will face lower hurdles seeking homeownership in the future as compared to households that default.

The chart below provides our sustainability scorecard for first-time buyers. We separate each annual cohort of first-time buyers into four categories based on the data that are available to date: default, renter, non-mover, and trade-up. The first two categories represent cases of non-sustainable homeownership while the second two represent sustainable homeownership. We require at least six years of data on a cohort to have a clear insight into the degree of homeownership sustainability for that cohort. We focus primarily on the cohorts prior to 2003 since they were the least impacted by the financial crisis. 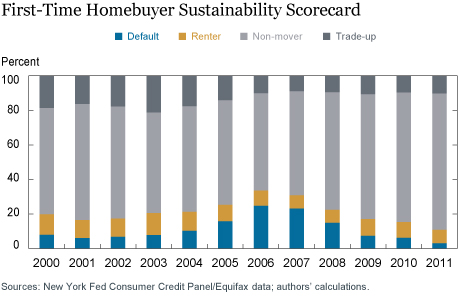 The cohorts from 2000 to 2002 were less affected by the financial crisis. For these cohorts of first-time buyers, homeownership was sustainable for roughly 82 percent. This group consisted of around 65 percent who remain in their original home and 17 percent who successfully paid off the mortgage on their first-time purchase, moved, and remained homeowners. As we look past the 2002 cohorts, we can see that the sustainability rate progressively declined, reaching a low of 66 percent for the 2006 cohort. Much of the decline in sustainability was due to an increase in the default rate that was only partially offset by a lower transition rate of non-defaulters back to renting. The recovery in housing markets brought on by the economic expansion has improved sustainability. The 2011 cohort currently exhibits a sustainability rate of 89 percent. Note, though, that the sustainability rates of the more recent cohorts may still deteriorate going forward as we continue to monitor the performance of these cohorts.

In the first post of this series, “A Better Measure for First-Time Homebuyers,” we documented that first-time buyers are particularly important for the Federal Housing Administration (FHA) program. For that reason, we have also developed an FHA first-time buyer sustainability scorecard. In this scorecard, we differentiate ongoing homeowners by whether they remain with an FHA mortgage or “graduate” out of the FHA program. This is to accommodate the possibility that reviews of the FHA program may view more favorably those cases when first-time buyers sold their home, paid off their FHA mortgage, and purchased a new home financed with a non-FHA mortgage, than similar cases when the new home is financed again with an FHA mortgage.

Focusing on the sustainable outcomes, between 2000 and 2002 roughly 55 percent of first-time buyers paid off their FHA mortgage and graduated out of the FHA system with their trade-up purchase. The remaining cases are roughly equally divided between households that moved, but again financed their home purchase with an FHA mortgage, and households who did not move and continued to pay down their FHA mortgages. 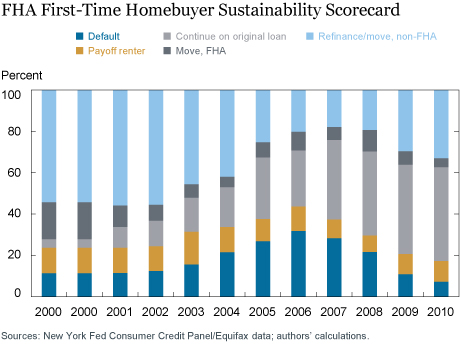 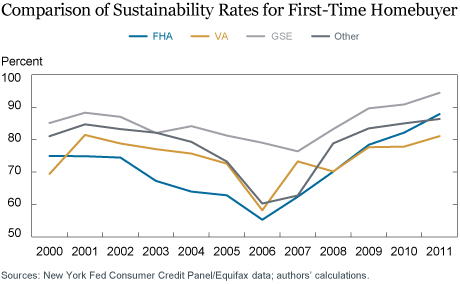 Can I suggest you need to cut all your cohorts to the same length? Ie if you only have 6 years of data for the 2011 cohort then you should only be showing the % of defaulter / renting / tradeup for the first six years of the other cohorts. If you don’t do this your 2010 has had an extra 10 years to mature than your 2010 cohort meaning your chart is mixing the effect of both what you are trying to show and time.