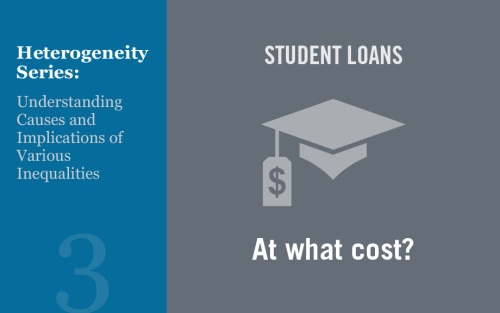 The spectacular growth in student loan debt has been due to an increase in both average balances and number of borrowers, defying the credit cycle through the Great Recession when balances on other types of debt contracted. Because a critical feature of the federal student loan program is its availability to all students, the credit constraints that borrowers faced during the recession did not bind and consequently student loans swelled. Between 2008 and 2018, the average balance per student loan borrower grew at about 5 percent per year, even surpassing the rapid growth in tuition, which the College Board estimates was between 2 percent and 3 percent depending on the degree and institution type.

Student loans are playing an increasing part of financing higher education, but have come with a share of challenges that have been discussed both in the press and on this blog. We’ve written about high delinquency and default rates and the slow progress that borrowers have made toward repaying their debt; repayment challenges are particularly acute for some types of degree-seekers (and especially for those who do not complete their degrees). And beyond the damage to credit reports incurred by student loan borrowers who have had repayment difficulties, we have demonstrated that higher student debt balances are associated with lower homeownership rates among college graduates. Still, college pays off on average—average income and the homeownership rate are far higher for college graduates. Consequently, Americans of all backgrounds have continued to borrow for college with the hope of higher earnings and a better life. But the variation in outcomes suggests that policy changes potentially could improve outcomes.

The data used in this analysis are from the New York Fed’s Consumer Credit Panel (CCP), an anonymized, representative panel of individual-level credit reports and loan-level student loan data from Equifax. Income information is not reported on credit reports; instead we classify individuals by the average adjusted gross income in their zip code using data from the IRS Statistics of Income from 2016. We group individuals according to zip code-income quartiles that have equal populations in each group. Both federal and private student loans are reported on credit reports but our data do not distinguish between the two; the vast majority of loans reflected on credit reports are federal loans, with less than 10 percent of those outstanding being private loans.

Repayment on student loans has been slow, with high delinquency and default rates. Overall, 15 percent of borrowers in the second quarter of 2019 were ninety or more days past due or in default on a student loan. That share reflects an improvement from 2013 when it peaked at more than 17 percent. In addition to delinquency, other factors contribute to slow repayment patterns, such as more accommodating repayment plans, forbearance, and deferment. Only about 36 percent of borrowers who were still current on their loan in the second quarter of 2019 had reduced their balance over the past twelve months.

Slow repayment has long-lasting consequences: ten years after leaving school, 2005 graduates had repaid less than 40 percent of their outstanding balances; 2010 grads fared especially poorly, with only 9 percent of their balances repaid five years after graduating. Subsequently, slow repayment has contributed to the burgeoning aggregate balance, as the pay down (outflow) of older vintages has been insufficient to offset inflow of newly originated balances.

A Look at Borrowers by Neighborhood Income

Next, we take a look at the CCP data with the zip code-income quartile classifications described above. The federal loan program is designed to provide opportunities to all Americans with equitable, accessible higher education financing. By both design and necessity, federal loans are not well underwritten. Student loan borrowers, who generally are young, do not have substantial borrowing experience and typically have lower (or no) credit scores. Relying upon the income or repayment history of parents to underwrite loans would undermine the program’s purpose. Thus, the student loan program as it stands distributes loans to borrowers across the income spectrum without regard to creditworthiness. Accordingly, the number of borrowers is distributed nearly equally across the zip code income quartiles, with between ten and eleven million borrowers in each group. The chart below depicts the number of student loan borrowers by the income-quartile of their zip code and their total balance owed. 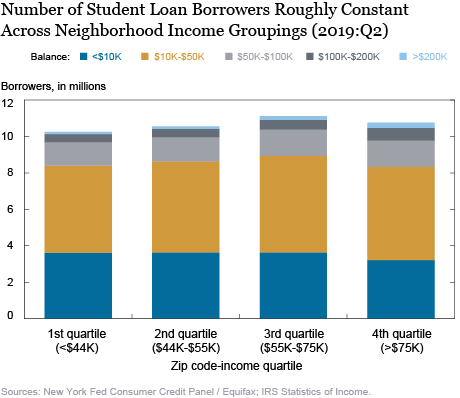 Although high-balance borrowers (here, those with balances of more than $100,000) are only 7 percent of the 43 million borrowers, their balances add up: they owe 35 percent of the aggregate student loan debt. High-balance borrowers are a bit more likely to live in high-income areas, and it is their debt that tilts the outstanding balance toward the wealthier zip codes. Next, we show the aggregate outstanding balance, and its composition by borrower zip code-income quartile. 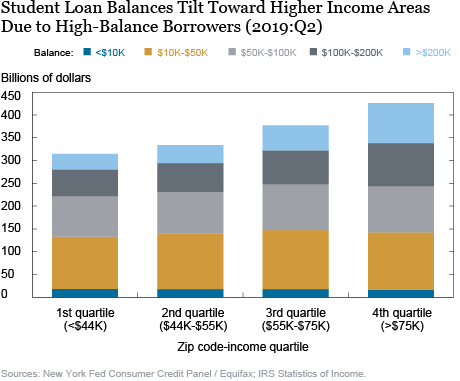 Given the wide gaps in income (and educational attainment) in the United States across income quartiles, it is surprising that the average balance is relatively constant. Average balances per borrower are higher by about $9,000 in the fourth quartile compared to the first. But, this difference in average balances is dwarfed by the differences in income across the distribution—the average income of the top quartile is more than three times that of the bottom, implying large differences in the debt-to-income ratios for the average borrower in each group. In 2016, the most recent year for which we have income data, the aggregate student loan balance was 22 percent of the aggregate income for the first quartile, but 8 percent of the average income for the wealthiest quartile. 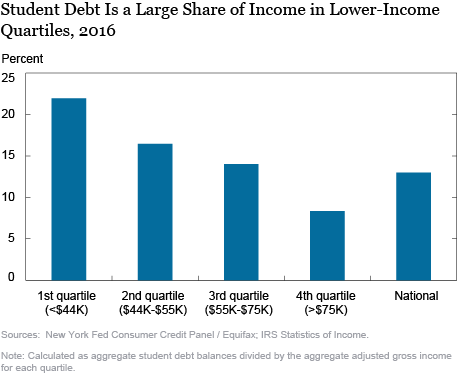 Consequently, borrowers from less affluent areas are more likely to struggle with repayment and have higher delinquency rates. As shown in the chart below, delinquency rates for student loans decline with the level of income in a particular zip code. In the top quartile, just over 9 percent of borrowers are ninety or more days past due or in default on their student loan, notably lower than the 23 percent rate seen in the first quartile. Although delinquency rates in the high-income areas are lower, there remains a very large share of borrowers who have not reduced their balances in the period from the second quarter of 2018 to the second quarter of 2019. This category of borrowers may include those who are either still enrolled (and therefore in deferment), have recently graduated, or are on some type of repayment plan through which their monthly payments are insufficient to offset the accruing interest. Although the share of borrowers in the “balance not declining” category edges slightly lower as incomes increase, it should be noted that a surprisingly large share, shown in gray, of borrowers are not actively reducing their balances even in relatively wealthy areas. 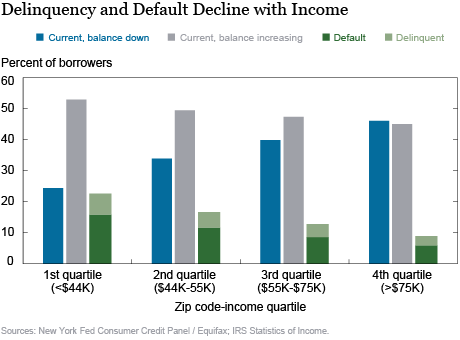 The federal student loan program enables many Americans to finance a college education and improve their economic prospects. With many policy proposals aimed at easing the burden faced by troubled student loan borrowers, and with a goal of making college more affordable for all, it is important to carefully consider the heterogeneous experiences of borrowers in trading off the program’s costs and distributional impacts.