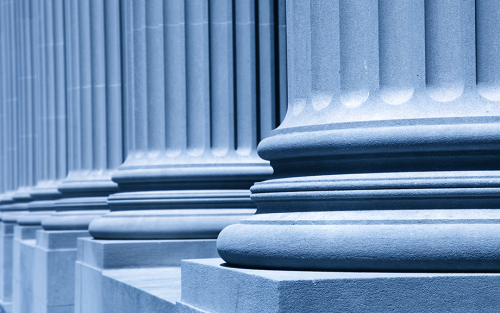 We consider the following measures that are based on models developed by New York Fed staff or adapted from academic research.

The chart below shows how the different aspects of vulnerability have evolved since 2002, according to the four measures. 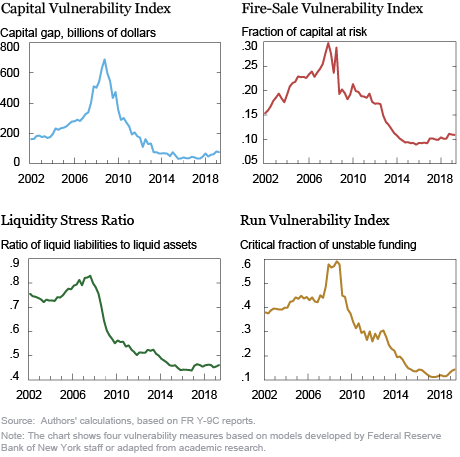 Next, we discuss developments of the individual measures in more detail.

The capital vulnerability index has increased over the past year, continuing a trend of sideways or upward movement since 2016.

Movements in the capital gap reflect the combination of changes in the starting level of capital, as well as changes in the fall in capital under an adverse macroeconomic realization forecast by the model. Starting capital ratios have increased in the past year, but have not yet returned to prior levels after the fall related to the Tax Cut and Job Act in the second quarter of 2017 (see the blue line on the left panel of the chart below). The fall in capital—the difference between the starting point of the common equity tier 1 (CET1) ratio and that at the end of the crisis redux scenarios—has also increased over the past year (see the right panel of the chart below). 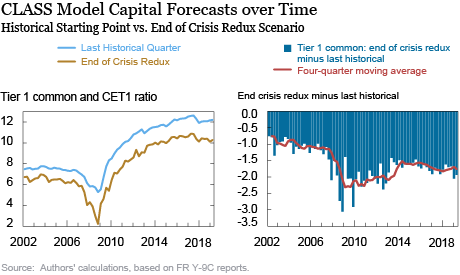 The evolution of the fall in capital is a way of understanding how, subject to the same scenario, bank capital is vulnerable. Although the capital fall is variable from quarter to quarter, the fall has increased in the past year (by 32 basis points), continuing an overall trend since 2014 of increasing risk should a scenario similar to that of the crisis be realized. This increase in the fall in capital arises primarily from weaker profitability relative to a year ago.

The fire-sale vulnerability index has been increasing slowly but steadily in the last three years, with a cumulative growth of 18 percent. Despite this recent climb, the level of the index remains low compared to its pre-2014 levels. 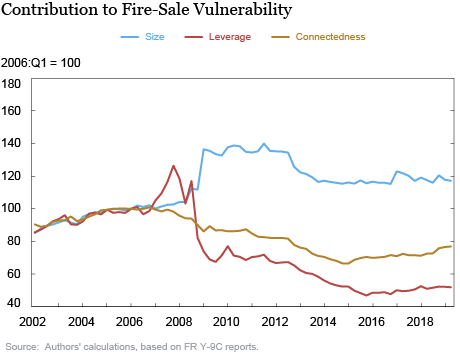 To shed some light on the reasons why the index evolves the way it does, the chart above decomposes the index into the overall size of the banking system (total assets), its leverage, and its “connectedness.” The increasing trend since 2016 can be attributed in equal parts to increases in leverage and connectedness, while the size component has remained essentially flat.

Another way to understand the index is by studying the contribution of individual asset classes to the index. The five asset classes that contribute the most as of the second quarter of 2019 are agency MBS, fed funds and repo loans, commercial and industrial loans, residential real estate loans, and consumer loans. Compared to the pre-crisis period, when residential real estate loans were considerably more systemic than all other asset classes, the model suggests no asset class stands out as particularly systemic in the recent past.

The aggregate liquidity stress ratio (LSR) has remained near all-time historical lows over the past few years. Looking at the decomposition of the LSR in the chart below, we see that liquidity-adjusted assets have risen slightly. This was accompanied by an inching down of liquidity-adjusted liabilities and off-balance-sheet items. 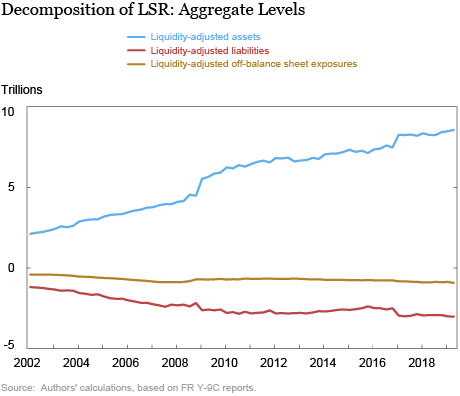 The LSR saw a peak in the third quarter of 2007 that was driven, to some extent, by the collapse in securitization and asset backed commercial paper markets. The LSR was improved, in part, by the Federal Reserve’s monetary stimulus programs, which drastically increased the amount of reserves in the banking system. Reserves and cash constitute a large component of liquid assets for some banks.

In part thanks to liquidity regulation, such as the liquidity coverage ratio, the largest U.S. banks are in a much stronger liquidity position, on aggregate, than at any point before or during the 2008 crisis. This is perhaps best exemplified by the fact that the LSR has remained stable, despite the removal of reserves of more than 1 trillion U.S. dollars from the banking system since 2014. While cash, of which reserves can be a large part, has fallen slightly in the most recent year, its decrease was not commensurate with the aggregate drop in reserves. Moreover, decreases in cash were countered by an increase in securities held by banks.

After remaining mostly flat between 2016 and 2018, the run vulnerability index has been slowly increasing over the past year. Considering the underlying components in the chart below, we see that the increase in the index was mainly due to small increases in stress leverage and illiquid assets. Stress leverage has been continuing an upward trend that started in 2015 (see the “Capital Vulnerability” discussion). The other two components, the shares of illiquid assets and unstable funding, have changed less over the past several years.

To understand better these two characteristics of the assets side and liabilities side, respectively, we consider their comprising parts in more detail. Illiquid assets are defined as the complement to liquid assets—which are composed of cash—Treasury securities and fed funds lending. In the post-crisis period, most of the variation in the liquid asset share is due to the variation in banks’ cash holdings, which mirror the level of aggregate reserves (see the “Liquidity Vulnerability” discussion). Since the beginning of the Fed’s tapering in 2014, however, the liquid asset share has stopped increasing and there has been a corresponding shift in banks’ liquid assets from cash toward Treasuries. Over the past year, the shift from cash to Treasuries has accelerated and the overall liquid asset share has started to decline slowly.

Fernando Duarte is an economist in the Bank’s Research and Statistics Group.

Thomas Eisenbach is a senior economist in the Bank’s Research and Statistics Group.

Anna Kovner is a Vice President and Policy Leader for Financial Stability in the Bank’s Research and Statistics Group.