The COVID-19 Pandemic and the Fed’s Response 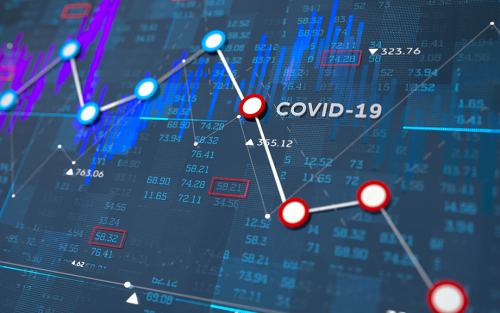 The Federal Reserve has taken unprecedented actions to mitigate the effects of the COVID-19 pandemic on U.S. households and businesses. These measures include cutting the Fed’s policy rate to the zero lower bound, purchasing Treasury and mortgage-backed securities (MBS) to promote market functioning, and establishing several liquidity and credit facilities. In this post, we briefly review the developments motivating these actions, summarize what the Fed has done and why, and compare the Fed’s response with its response to the 2007-09 financial crisis.

The Spread of COVID-19
On December 31, 2019, the World Health Organization (WHO) was informed of an outbreak of a pneumonia of unknown cause in Wuhan, China. The outbreak was later attributed to a novel coronavirus (COVID-19 is an acronym for the disease caused by this virus). Cases increased in China and then began to spread internationally in January and February. A sharp increase in global confirmed cases was noted in March, with the WHO declaring COVID-19 a global pandemic on March 11 (see the chart below which highlights the exponential growth in confirmed cases). In the United States, the first case was reported on January 21, with cases rising rapidly thereafter and tallying the highest confirmed case count of any country as of March 26. 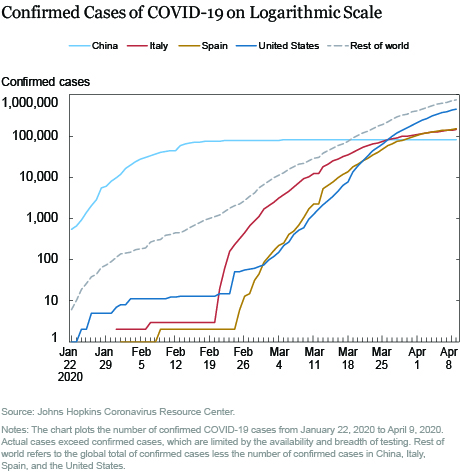 Effects on the Economy and Markets
The coronavirus’s high transmissibility and rapid spread spurred public health experts to advocate for increasingly aggressive countermeasures, which governments then implemented. Social distancing rules imposed restrictions on work and movements deemed nonessential, and advisories and restrictions limited travel between countries and, sometimes, within countries.

Consequent to these actions, activities and services requiring face-to-face transactions and large congregations of people declined significantly. Firms in the transportation, retail, and services sectors were especially affected, but productivity suffered more generally as employees got sick and supply chains were disrupted. Many individuals lost their jobs, were forced to reduce spending, and faced financial hardship.

In the United States, in particular, initial claims, which reflect the number of workers filing for unemployment insurance for the first time, totaled an unprecedented 16.8 million during the three weeks ending on April 4. Alongside the loss of jobs, consumer confidence plunged and the Weekly Economic Index fell to a level not seen since the 2008 financial crisis. In the New York, New Jersey, and Connecticut area (an epicenter of the outbreak), about 40 percent of service firms and 30 percent of manufacturing firms reduced payroll staff.

As revenues plummeted and firms ran low on cash, their borrowing needs increased. Firms drew down their lines of credit from banks and attempted to borrow in short-term funding markets. Unusually high funding needs and pullbacks by key suppliers of short-term funds (such as prime money market funds) led to higher rates and stressed markets, prompting the Fed to step in, as described below. Costs for borrowing longer term in corporate bond markets also increased markedly, especially for lower-rated issuers and issuers directly affected by social distancing measures.

As coronavirus cases spread outside China, global asset prices dropped. The S&P 500 index declined steeply, triggering market-wide circuit-breakers that halted trading three times in March. By March 23, the stock market had fallen 34 percent from its February 2020 high (see chart below). Investors sought the safety of U.S. government bonds, pushing yields to record lows. Measures of implied volatility rose sharply, indicating high uncertainty about the future. Typical relationships in financial markets broke down, such as those between stock prices and Treasury yields, amid heightened illiquidity in the Treasury market and forced selling by leveraged hedge funds. 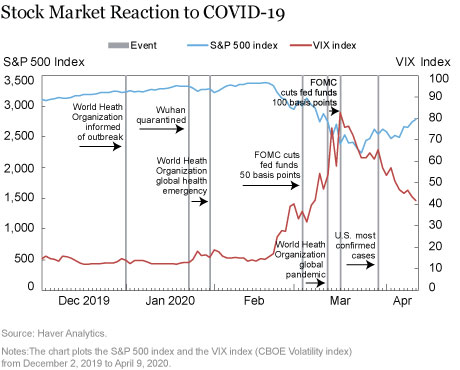 The Fed’s Response
The Fed employed both conventional and unconventional policy tools to address the economic and financial disruptions caused by the pandemic. The Federal Open Market Committee (FOMC) quickly cut the target range for the federal (fed) funds rate to the zero lower bound, citing risks to economic activity from the coronavirus (see chart below). The FOMC lowered the target range by 50 basis points on March 3 and an additional 100 basis points on March 15. Both changes occurred between scheduled meetings, with the latter being the first on a weekend since the policy of announcing rate changes started in 1994. Reductions in the Fed’s policy rate tend to lower interest rates more broadly (such as for mortgage rates), spurring borrowing and spending by both consumers and businesses. 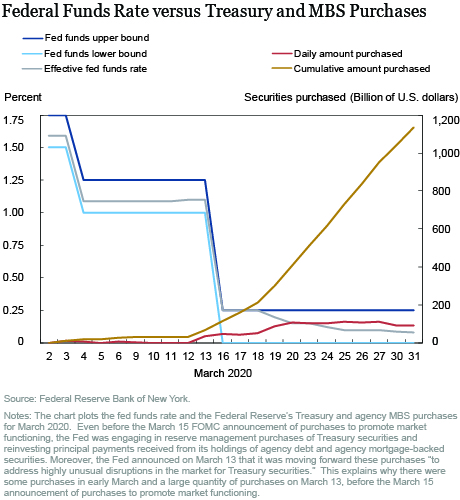 Moreover, to address disruptions in funding markets, the Fed increased the sizes and terms of its repo operations, starting March 9. On March 15, the FOMC reaffirmed the role of its repos in supporting the smooth functioning of short-term U.S. dollar funding markets.

The FOMC also announced on March 15 that it would use its full range of tools to support the flow of credit to households and businesses. In particular, the FOMC said it would increase its holdings of Treasury securities and agency MBS by at least $500 billion and $200 billion respectively, to support the smooth functioning of financial markets. After buying $340 billion in securities in the week of March 15, the FOMC announced on March 23 that it would continue to purchase Treasury securities and agency MBS “in the amounts needed” to support market functioning and the effective transmission of monetary policy (see chart above for purchases in March) and that it would include purchases of agency commercial mortgage-backed securities in its agency MBS purchases.

The Fed announced related measures on March 15 to support the credit needs of households and businesses. The Fed encouraged depository institutions to borrow from the discount window by lowering the primary credit rate (the discount window borrowing rate for banks) by 150 basis points, including a 50 basis point narrowing relative to the fed funds rate. The Fed further supported lending by reducing reserve requirements to zero and by encouraging the use of intraday credit extended by Reserve Banks for facilitating payments.

The Fed also took several supervisory and regulatory actions in recent weeks to support financial institutions and the economy. It temporarily relaxed the leverage ratio that large and community banks have to maintain, it encouraged banks to use their capital and liquidity buffers to lend to households and businesses in a safe and sound manner, and it offered regulatory reporting relief to small financial institutions. The Fed also encouraged banks, savings associations, and credit unions to offer responsible small-dollar loans to consumers and small businesses and to work constructively with borrowers affected by COVID-19.

In addition, the Fed established a series of funding and liquidity facilities to promote the smooth functioning of financial markets and flow of credit in the economy (see table below). Two facilities are designed to support credit to large employers so they are able to maintain their business operations and capacity (PMCCF and SMCCF; see all acronyms defined in the table). Three additional facilities support credit to small- and medium-sized businesses through new and expanded loans, enabling employers to maintain payroll and employees (MSNLF, MSELF, and PPPLF). Three other facilities aim to mitigate disruptions in short- and medium-term markets that support credit provision to individuals and businesses (CPFF, MMLF, and TALF). The Municipal Liquidity Facility purchases loans from state and local governments to help them manage cash flow pressures and the Primary Dealer Credit Facility provides funding to primary dealers to support market liquidity and functioning. Most of these facilities are backed by equity investments or credit protection from the U.S. Department of the Treasury, using funds appropriated by Congress under the Coronavirus Aid, Relief, and Economic Security Act (“CARES Act”).

Given the global nature of the pandemic, the market for borrowing U.S. dollars (which are widely used in international transactions) was also disrupted. The Fed has standing dollar liquidity arrangements (swap lines) with five foreign central banks that allow the latter to lend U.S. dollars to banks and firms in their own countries. To further improve the functioning of U.S. dollar funding markets, the Fed announced on March 19 temporary swap lines with nine additional central banks. Moreover, the Fed announced on March 31 the launch of a new facility (the FIMA Repo Facility) to allow foreign central banks to raise U.S. dollars against their holdings of U.S. Treasury securities at the Fed. This arrangement reduces foreign central banks’ incentives to sell U.S. Treasuries in the open market.

Responding to the COVID-19 Pandemic versus
the Financial Crisis of 2007-09
The Fed’s response to the pandemic has elements that are similar to and different from its actions in 2007-09. One similarity is that a broad range of financial markets were stressed in both instances, motivating the Fed to assist these markets with conventional and unconventional tools. One difference with the pandemic is that the Fed introduced facilities to provide credit to large employers to maintain operations and capacity, and introduced the Main Street Lending Program to support small- and medium-sized businesses. These programs aimed at nonfinancial firms reflect the widespread and rapid impact of COVID-19 on the real economy. In contrast, the 2007-09 crisis started in the financial sector, explaining why policy efforts at the time targeted that sector.

Another difference is the speed and scale with which the Fed responded. During the financial crisis, the fed funds rate stood at 5.25 percent in the summer of 2007. It was not until December 2008 that the target rate was first brought to the zero lower bound. Moreover, unconventional policy tools, including liquidity facilities and LSAPs, were introduced progressively and with gradually expanding size through the crisis in response to the turmoil in financial markets, including the bankruptcies and government-led recapitalizations of several large and systematically important financial institutions.

In contrast, the response to COVID-19 has featured fed funds rate cuts, Treasury and MBS purchases, liquidity facilities, and credit programs, announced in rapid succession over the course of just a few weeks. This reflects the alarming speed with which the pandemic and its impact spread, affecting economic activity and financial-market functioning. The actions likely also reflect lessons learned and experience gained from the financial crisis, including the use of unconventional policy tools that are now more familiar and quicker for the Fed to put into effect.

Summing Up
The economic and financial disruptions precipitated by the COVID-19 pandemic triggered an unprecedented response by the Fed. The Fed applied its usual tools to mitigate the effects, cutting its policy rates and providing liquidity to the banking system, as well as tools rarely used or newly created, including several liquidity and credit facilities. But because the COVID-19 pandemic is fundamentally a health crisis, it ultimately requires a medical resolution. Nonetheless, the Fed’s policy actions are important for alleviating the economic fallout until such a resolution is found and for facilitating the restart of the economy thereafter.