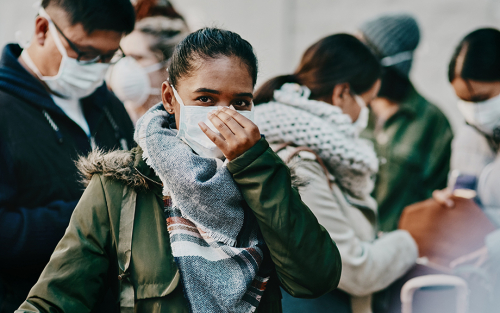 In this post, we study whether (and how) the spread of COVID-19 across the United States has varied by geography, race, income, and population density. Have urban areas been more affected by COVID-19 than rural areas? Has population density mattered in the spread? Has the coronavirus’s impact varied by race and income? Our analysis uncovers stark demographic and geographic differences in the effects of the pandemic thus far.

We use county-level data as of June 11, compiled by the New York Times and the New York City Department of Health (NYC Health) on numbers of cases and deaths for our analysis. The New York Times compiles a daily series of confirmed cases and deaths by county for almost every county in the United States. Its data set aggregates New York City, which consists of five counties, into a single entity. To get a breakdown of deaths and cases by New York City’s boroughs, we use data from NYC Health. Since race and income data for affected individuals are not available in all states, we match our county-level COVID-19 data with county-level data on race, income, urban status, and population density from the 2014-18 five-year American Community Survey to understand the dispersion of COVID-19 by these factors. 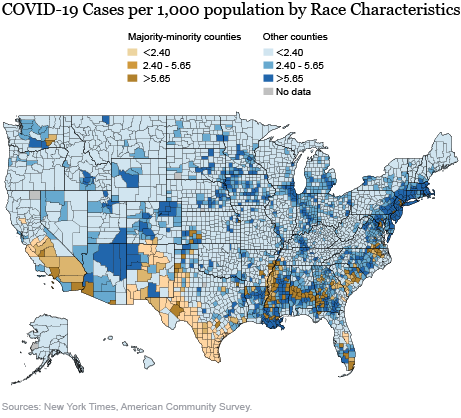 However, such simple univariate descriptive analysis leaves open the question of whether the higher incidence of the virus in MM areas is best explained by their racial distribution or by other factors such as income, population density, and urban status. We define urban counties as counties that lie within metropolitan statistical areas. To parse out these effects, we next present results from some multivariate regressions. All regressions below control for time-invariant characteristics of the states and exploit within-state variation to understand patterns. We define low-income counties as those that fall in the bottom quartile of the population weighted distribution of median household income. 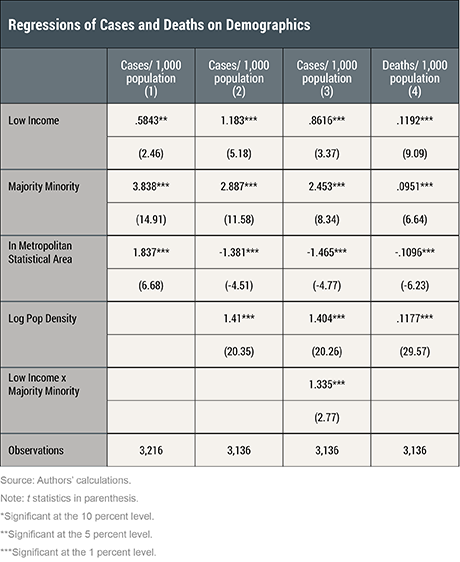 We find that population density played a major role in the spread of the virus. The scatter reveals that denser counties were the first to see cases and the rate of cases has been markedly larger in denser counties. The bubbles in the upper rows start growing well before the bubbles in lower rows do and they are markedly larger in size than the bubbles in the lower rows. In a chart, not included here, we find that the picture looks qualitatively very similar if we replace cases by deaths in the scatter chart below. The higher susceptibility of dense areas is because it is relatively difficult to socially distance in places with higher population density, which increases the risk of COVID-19 infection. 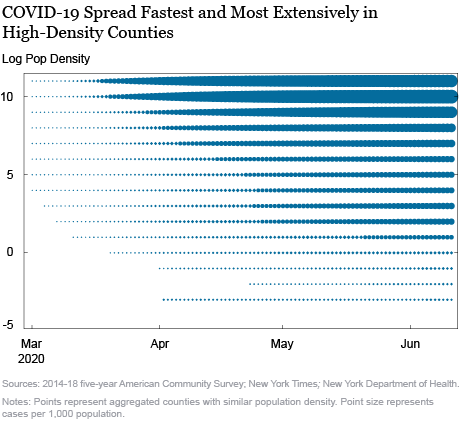 In this post, we have studied heterogeneity in incidence of COVID-19 (cases and death rates) by urban, minority, and low-income status. We find that urban areas, majority-minority communities, and low-income communities have been impacted markedly more than other communities. Delving deeper, we find that the higher incidence of COVID-19 cases and deaths in urban areas is due to their higher population density. Controlling for population density, we find that urban areas are likely to have lower case and death rates. This may be due to better medical care facilities (hospitals, doctors, medical equipment) and better/easier availability of essential commodities and services. The larger vulnerabilities in low-income and majority minority communities continue to remain prominent even after controlling for the effect of population density. In ongoing work, we are studying the underlying reasons behind the differences in vulnerabilities in majority minority and low-income areas. Is this due to differences in pre-existing comorbidities? Is it because of differences in access to the health care system? Is it because of higher exposure in certain jobs (for example, essential versus non-essential) for which social distancing is more difficult? These are questions we are continuing to study; stay tuned for forthcoming postings in this area.