« Which Workers Bear the Burden of Social Distancing Policies? | Main | Distribution of COVID-19 Incidence by Geography, Race, and Income »

The onset of the COVID-19 shock in March 2020 brought large changes to the balance sheets of the U.S. branches of foreign banking organizations (FBOs). Most of these branches saw sizable usage of committed credit lines by U.S.-based clients, resulting in increased funding needs. In this post, we show that branches of FBOs from countries whose central banks used standing swap lines with the Federal Reserve (“standing swap central banks”—SSCBs) met their increased funding needs by accessing dollars that flowed into the United States through their foreign parent banks. This volume of dollar inflows accounted for at least half of the late March aggregate take-up at SSCB dollar operations.

Foreign Banks in the U.S. Provide Credit to Local Corporations

U.S. branches of foreign banks are part of global banking organizations from twenty-one different countries, with over $2 trillion in aggregate assets—about 10 percent of the total U.S. banking system. Those assets include roughly $700 billion in loans, which are mainly to U.S. corporations. U.S. FBO branches also provide extensive backstop financing for their clients via large off-balance-sheet credit commitments (for example, undrawn lines of credit). In early 2020, these outstanding commitments totaled nearly $1 trillion, or about 40 percent of branch balance sheets, on average. U.S. FBO branches fund their activities in part through uninsured retail deposits from corporations and money market funds.

Global banking organizations manage liquidity globally, allocating funding internally across locations according to needs and business strategies. While such global bank liquidity management facilitates both international risk sharing and the associated international spillovers of shocks, internal capital markets also can play a role in supporting economic activity and financial market functioning, as in Buch and Goldberg (2020).

The COVID-19 shock had a significant impact on U.S. FBO branch balance sheets. In the chart below, amounts are normalized to January 1, 2020 totals, so that each line displays the percentage change from that initial point in time. Substantive changes in FBO branch balance sheets began in late February. As funding strains became evident, deposits began to decline and the net funding that U.S. FBOs received from parent organizations rose, as did other borrowings, including those secured through the fed funds market, the repo market, and the Federal Reserve’s discount window. 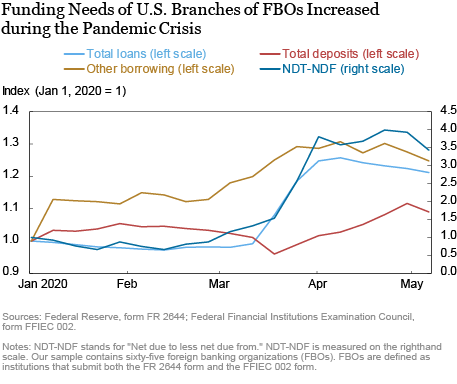 More sizable changes occurred in the third week of March, when FBO branch balance sheets registered a combined sharp decline in deposits, a marked increase in lending, further increase in other borrowing, and a substantial jump in funding received on net from their parent organizations. The sharp increase in lending was likely due to large customer draws on the sizable credit commitments in place with the branches rather than reflecting new loan extensions. The freezing up of the corporate credit market led customers to draw on those lines, resulting—all else equal—in U.S. FBOs facing an increase in funding needs to match the increased amount of loans on their balance sheet.

By mid-March the Federal Reserve and other central banks had taken extensive actions to contain and reduce COVID-19-induced stresses in financial markets. With respect to global dollar funding markets, in mid-March the Federal Open Market Committee (FOMC) made changes to improve the availability of dollars through its standing central bank swap lines, which are with the Bank of Canada, Bank of England, Bank of Japan, European Central Bank, and Swiss National Bank, in addition to changes for some other central banks. Overall, these actions improved conditions in dollar funding markets, as discussed in a recent Liberty Street Economics post.

Branches of FBOs with access to dollar liquidity through the swap operations of SSCBs borrowed more internally from their parent organizations. In the table below, we consider FBO branches that, prior to the COVID-19 crisis, had either high or low levels of commitments to their corporate clients as a share of their total assets. This would be a proxy for the pre-existing level of exposure to a sudden funding need. We further separate the branches according to whether they are from standing swap line countries—that is, Japan, Switzerland, the United Kingdom, and countries within the euro area, whose central banks (respectively, the Bank of Japan, Swiss National Bank, Bank of England, and European Central Bank) offered dollar operations related to standing swap lines during this period. Each cell in the table shows the average change in branches’ borrowing from parent organizations (as a share of total assets) over a four-week window centered on March 15, the date of the changes made in the swap operations.

Overall, the share of net internal borrowing among U.S. branches of FBOs, after the changes in dollar availability through the standing swap lines, increased by 18.3 percentage points more for branches with larger needs for such funding, if they had access to these dollars. As a benchmark, the median share of internal borrowing to total assets at the beginning of the year was 14.3 percent, so a change of 18.3 percentage points is large and economically significant. 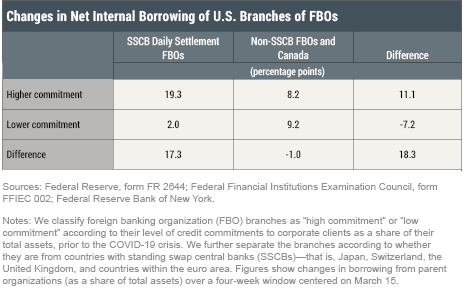 Did this influx of dollar funding from parent companies adequately support FBO balance sheets? We estimate the actual funding needs of FBO branches resulting from the pandemic shock by summing the increase in total lending and the decrease in external deposit liabilities observed over the weeks prior to March 18, 2020. The mean dollar increase in internal borrowing was approximately $4.6 billion, while the corresponding mean increase in funding needs was $3.3 billion. This suggests that the response to the shock through the activation of an internal funding channel was more than sufficient to support the balance sheet needs of FBO branches. The fact that the increase in internal borrowing was even larger than what was immediately needed seems to suggest that dollars obtained from parent companies were also used to boost overall precautionary liquidity, or to support some of the liquidity needs of related intermediate holding companies.

The Fed’s U.S. dollar standing swap lines with a number of other central banks were important for helping foreign banks to continue to provide credit in the United States through their U.S. branches, in addition to smoothing strains in global dollar funding markets.

Linda S. Goldberg is a senior vice president in the Bank’s Research and Statistics Group.