« Expanding the Toolkit: Facilities Established to Respond to the COVID-19 Pandemic | Main | The Official Sector’s Response to the Coronavirus Pandemic and Moral Hazard » 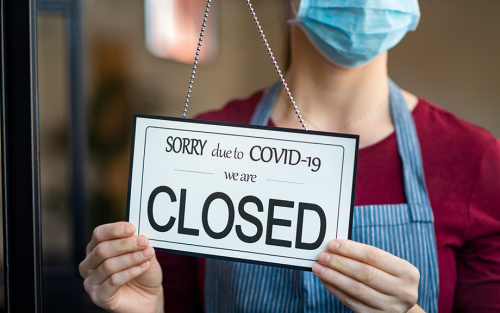 In the United States and other free market economies, the official sector typically has minimal involvement in market activities absent a clear rationale to justify intervention, such as a market failure. In this post, we consider arguments for official sector intervention, focusing on the market failure arising from externalities related to business closures. These externalities are likely to be particularly high for closures arising from pandemic-related economic disruptions. We discuss how the official sector, including institutions such as Congress and the Treasury, can increase social welfare by acting to minimize the fixed costs of business start-up and failure, including the costs associated with unemployment, beyond the level set by private markets alone.

During a pandemic, the need for physical distancing to limit the spread of a disease can severely depress economic activity. In thinking about the response to a pandemic, we need to begin with some assumptions about how business activity will respond. We assume that businesses that were viable before the pandemic will be viable when distancing measures are relaxed and economic activity restarts, which is a reasonable assumption if the pandemic doesn’t have permanent effects. In other words, unlike in a traditional recession, losses during a pandemic may not be informative about the long-run viability of a business.

Borrowing during the Pandemic

Even if the business has positive NPV, it may have a short-term cash flow problem, since its income is negative in the near term. One way to solve that cash flow problem is to borrow and repay the debt once the disruption is over. The private sector should be able to provide the loan, because it is profitable to do so. The presence of a cash flow problem does not necessarily justify official sector intervention.

In contrast, if the business has a negative NPV because the pandemic lasts too long, banks will not want to extend loans. Should the official sector then be willing to extend support to businesses? The answer can be “yes” if these businesses are expected to recover, because there are fixed costs of closing and opening businesses, including costs to workers when they face unemployment. Moreover, these costs are likely to be particularly high during a systemic shock, like a pandemic. The costs to society associated with bankruptcy, for example, will increase if a wave of bankruptcy overwhelms bankruptcy courts. Recent research shows that workers who are permanently separated from their employer fare much worse than those who are laid off temporarily and rehired.

A bank that is considering giving a loan to a business cannot directly benefit from avoiding these costs. From the bank’s perspective, what matters is that the loan will be paid back, something that will happen only when the NPV of the business, net of the costs of replaying the loan, is positive.

Why is a pandemic not like a standard recession?

If there is a social benefit to avoiding the fixed costs of business start-up and failure, why not always intervene? After all, in more standard business downturns, businesses that would otherwise be viable may fail. The difference with a pandemic is twofold. First, the signal that negative cash flows provide about the future viability of a business is less informative in the case of a pandemic. When the economy is shut down to respond to a pandemic, we don’t learn much about a business’s prospects after the economic disruption is over, because the impact of the virus is not correlated with the quality of the business. In contrast, in a recession, a negative cash flow is much more likely to signal that a business will not be viable when the economy recovers. During a recession, businesses that were already weak are likely to perform particularly poorly.

Second, the scale of the negative cash flow shock makes a difference. As mentioned previously, some of the costs associated with business closures are likely higher when many businesses suffer simultaneously, increasing the value of official sector interventions.

An important assumption is that the pandemic is a temporary shock. Nevertheless, the pandemic could have long-lasting effects. For example, business travel may not recover to pre-pandemic levels if video conferences are perceived to be a sufficiently good substitute. Official sector support should be aimed at firms that are expected to be viable once the pandemic disruption has subsided.

Is this a liquidity intervention?

It may be useful to distinguish between “solvency” and “viability,” where solvency is defined to mean that NPV is positive, including losses during the immediate COVID impact, and viability means that net income in normal times is positive. If the shock faced by the business is permanent, then it would be solvent if and only if it is viable. So it would never be a good idea to support an insolvent business, as it would not be profitable to restart after the shock subsides.

Any official intervention in a situation where the business has a negative NPV from a private perspective has the flavor of fiscal policy. It constitutes a transfer to the business that would, from a private perspective, not be solvent. Such interventions could not be undertaken by the Fed alone. Indeed, Chair Powell has observed that the Fed has lending powers, not spending powers, so the Federal Reserve is not always the appropriate entity to undertake these interventions.

Uncertain Length of the Pandemic

Private incentives don’t take into account some important costs, such as the costs associated with closing businesses and reopening new ones, as well as the costs of unemployment. The official sector can take these costs into account and offer support that increases social welfare when the private sector would choose not to. In tomorrow’s post, we discuss the risk of moral hazard; the concern that these interventions would result in better outcomes now but at the cost of more risk in the economy later.

Expanding the Toolkit: Facilities Established to Respond to the COVID-19 Pandemic
The Official Sector’s Response to the Coronavirus Pandemic and Moral Hazard