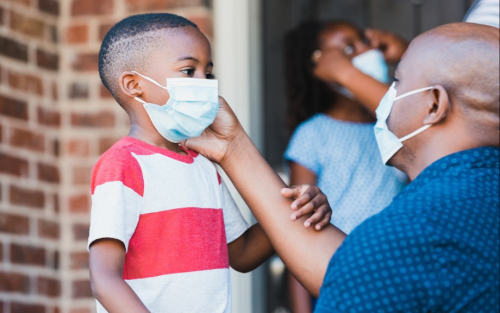 The COVID pandemic, dubbed “The Uncertainty Pandemic” by Harvard economist Kenneth Rogoff, has been accompanied by high and pervasive uncertainty about the future path of the virus and the response to it by policymakers, households, and firms. Here we assess consumers’ views about the future course of the pandemic and about its impact on future household economic decisions and outcomes, drawing on the SCE. Since June 2013 the SCE collects information on the economic expectations and behavior of households.

Expectations Regarding the Duration of the Pandemic’s Economic Impact

We start with consumers’ beliefs regarding the expected number of weeks it will take for U.S. economic activity to get back to pre-COVID levels. When asked in June, the average expected number of weeks required for economic recovery was 94 weeks. This average increased to 132 weeks (more than 2 years) in August. Even though there are differences in the expectations of respondents, the increase since June in the expected duration of the economic recovery is similar across demographic groups. 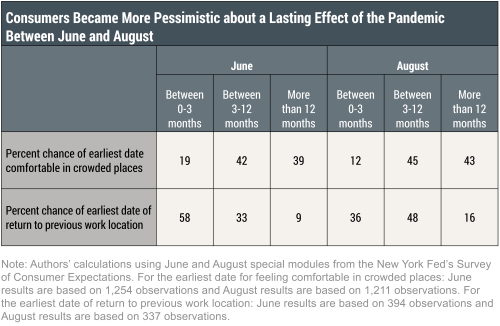 How sensitive do consumers expect their future spending, income, and debt repayment to be to the evolution of the pandemic? To address this question, we took an experimental approach as part of the special SCE survey fielded in August 2020. The basic idea is to test how spending, income, and debt repayment expectations respond to different scenarios for the path of the pandemic. Each SCE respondent was asked to consider three hypothetical scenarios for the possible evolution of the COVID pandemic in the United States over the next six months. Under the “baseline” scenario, the levels of new coronavirus cases, deaths, and restrictions on distancing in the United States (including where the respondent currently lives) all remain exactly the same as they currently are today. The coronavirus cases, deaths, and restrictions on distancing all gradually drop to zero over the next six months in the “good” scenario, whereas they double in the “bad” scenario. For each scenario, we ask the respondents what they think would happen to their monthly household spending, income, their ability to make necessary payments, their employment prospects, and chances of applying for government assistance over the next six months. 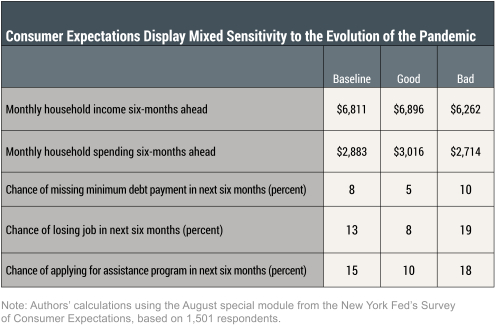 Jessica Lu is a senior research analyst in the Bank’s Research and Statistics Group.