The four models, introduced in a Liberty Street Economics post in 2018 and updated in a post last year, monitor vulnerabilities of U.S. banking firms and the way in which these vulnerabilities interact to amplify negative shocks. Between 2017 and the beginning of 2020, the different models had followed a common, slowly increasing trend of higher vulnerability. With the unfolding of the COVID-19 pandemic, this worsening trend has continued for the capital vulnerability and fire-sale vulnerability measures, while the liquidity stress ratio decreased and run vulnerability remained almost unchanged.

How Do We Measure Banks’ Vulnerability?
We consider the following measures, all based on models developed by New York Fed staff or adapted from academic research. Measures are calculated for banks and bank holding companies (including intermediate holding companies). Institutions are collectively referred to as “banks” for simplicity in this post.


How Have Measures of Vulnerability Evolved Over Time?
The chart below shows how the different aspects of vulnerability have evolved since 2002, according to the four measures calculated for the fifty largest U.S. banks. The dashed lines indicate the values as of the previous update in the second quarter of 2019. 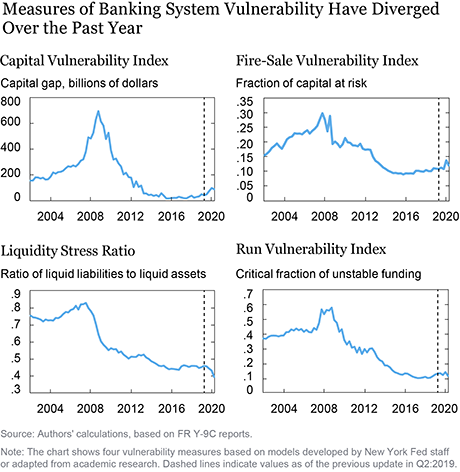 How Has the COVID-19 Pandemic Affected Banks?
To understand the evolution of the vulnerability measures over the past year, we begin by documenting key changes in banks’ balance sheets in the chart below. Between the second quarter of 2019 and the second quarter of 2020, total assets of the banks in our sample increased by $2.2 trillion. The majority of that increase was in the form of a $1.1 trillion increase in cash and a $730 billion increase in securities, mostly Treasury securities and agency mortgage-backed securities (MBS). Combined with a smaller increase in loans ($290 billion), these changes resulted in a significant increase in the share of liquid assets on banks’ balance sheets. On the liabilities side, the balance sheet expansion was almost exclusively in the form of deposits ($2.1 trillion). 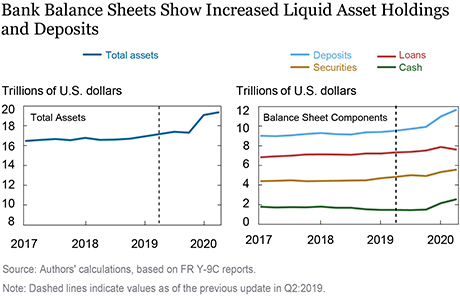 How Have These Changes Affected the Vulnerability Measures?
Capital vulnerability: The recent increase in this index reflects both short-term and longer-term trends. In particular, large capital payouts from 2017 to 2019 and weaker profitability since late 2018 contributed to the early increase in this vulnerability. More recently, the increase in net charge-offs caused by the COVID-19 pandemic, particularly in commercial real estate and commercial and industrial (C&I) lending, has contributed to the continuation of the upward trend.

Summing Up
The largest change we measure in the last year is the increase in net charge-offs, which has resulted in an increase in the capital vulnerability index. The capital gap stands at $88 billion as of the end of the second quarter of 2020, reflecting the potential impact of a renewed deterioration in employment and the macroeconomic environment more broadly. While this gap is large relative to recent history, it remains below the levels seen in the run-up to the 2008 financial crisis due to the improved capitalization of banks post-crisis. Fire-sale vulnerability has also increased as the largest banks grow larger and more levered. However, elevated levels of these indexes are mitigated in part by decreases in the liquidity stress ratio. Combining the improved liquidity and deteriorated capital under stress, run vulnerability has remained almost unchanged.


Matteo Crosignani is an economist in the Research and Statistics Group.

Fernando Duarte is a senior economist in the Research and Statistics Group.

Thomas Eisenbach is a senior economist in the Research and Statistics Group.

Fulvia Fringuellotti is an economist in the Research and Statistics Group.

Posted by Blog Author at 07:00:00 AM in Financial Institutions, Pandemic