« How Does Zombie Credit Affect Inflation? Lessons from Europe | Main | Understanding the Impact of COVID-19: The Top Five LSE Posts of 2020 »

This post presents an update of the economic forecasts generated by the Federal Reserve Bank of New York’s dynamic stochastic general equilibrium (DSGE) model. We describe very briefly our forecast and its change since September 2020.

In response to the pandemic, we changed the New York Fed’s DSGE model to reflect the fact that the economic disruptions caused by COVID‑19 are likely different from standard business cycles. The model now includes additional shocks designed to reflect phenomena like lockdowns and social distancing (the model description on the GitHub page describes these changes in some detail). For this round of forecasts two further changes were made to the model. First, the model incorporates an additional COVID-19 demand shock taking place in 2020:Q4 but anticipated in Q3. This shock captures the renewed weakness in demand in the current quarter stemming from the second wave of the pandemic, and its size is disciplined by imposing that the Q3 expectation for real GDP growth in Q4 coincides with the median forecast from the November Philadelphia Fed Survey of Professional Forecasters (henceforth, SPF), namely 4.0 percent, annualized. We also consider a second more pessimistic scenario where we impose that expected real GDP growth in Q4 coincides with the 10th percentile of the cross- sectional distribution of SPF point forecasts (1.2 percent, annualized). The two scenarios are combined using weights (80, and 20 percent, respectively) that are loosely informed by the SPF average probability distribution for 2020 year-over-year real GDP growth.

Second, the model replaces the historical policy reaction function with a new reaction function, flexible average inflation targeting (AIT), reflecting our interpretation of the changes in the FOMC monetary policy strategy announced last August. In our implementation, which we describe in more detail in the model description on the NY Fed DSGE GitHub page, the interest rate reacts to a moving average (MA) of deviations of PCE inflation from the FOMC long run goal of 2 percent, where the MA half-life is ten quarters. It also reacts to an MA of deviations of output growth from its steady state value in light of both the Federal Reserve’s dual mandate and the central bank’s intention to support the recovery from the COVID-19 recession. Finally, the new reaction function features inertia, like the old one. The reaction function parameters were chosen so that the liftoff of interest rates from the effective lower bound would take place in early 2023, and would be very gradual. We should stress that the specific formulation of the rule, as well as the choices for the parameters, in no way reflect the views of the FOMC but simply our way of implementing flexible AIT in the context of the model.

Importantly, the model assumes that the introduction of the new reaction function is only partially incorporated by the agents in forming expectations. Specifically, expectations are formed using a convex combination of forecasts obtained under the old and the new policy reaction functions using weights of 2/3 and 1/3, respectively. This approach reflects the fact that expectation formation by households and firms may adjust slowly to the introduction of the new policy strategy. The December model forecast is summarized in the table below, alongside the September forecast, and in the following charts. The model uses quarterly macroeconomic data released through the third quarter of 2020, financial data available through November 19, 2020, and SPF forecasts for GDP growth as described above. 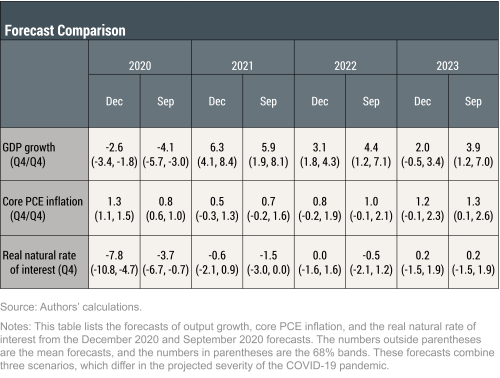 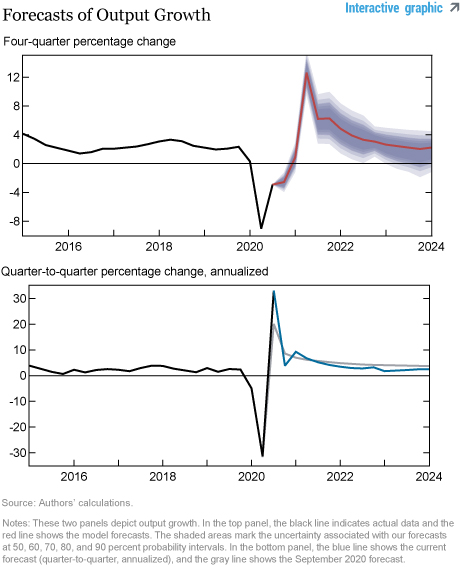 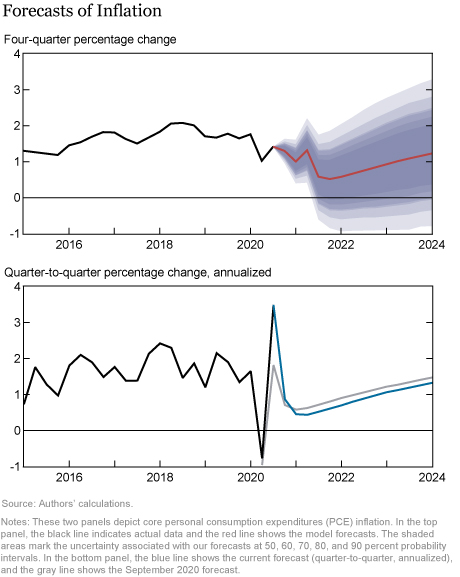 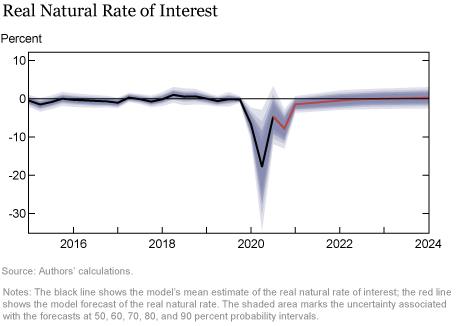 
Alissa Johnson is a senior research analyst in the Bank’s Research and Statistics Group.

Posted by Blog Author at 07:00:00 AM in DSGE, Forecasting, Macroecon