« How Did the Great Recession Affect New York State’s Public Schools? | Main | Historical Echoes: When Pigskins Fly – the Super Bowl and Other “Predictors” »

Today’s post, which complements Monday’s on New York State, considers the Great Recession’s impact on education funding in New Jersey. Using analysis published in our recent staff report, “Precarious Slopes? The Great Recession, Federal Stimulus, and New Jersey Schools,” we examine how school finances were affected during the recession and the ARRA federal stimulus period. We find strong evidence of a significant decline—relative to trend—in school revenues and expenditures following the recession as well as key compositional changes that could affect school financing and student learning. Our findings are noteworthy in view of the importance of investing in children’s education for human capital formation and economic growth.

Education is especially vulnerable to the depleted revenues and cuts in state and local government budgets that have been pervasive in this recession because these governments provide the vast majority of education funding. To mitigate the effect of budget cuts on student achievement after the recession began, the federal government designated for public education the largest portion of its stimulus package grant funding. In February 2009, Congress passed the American Recovery and Reinvestment Act (ARRA), an economic stimulus package that provides an anticipated $840 billion in new spending, with $100 billion designated for public education. Of this total, New Jersey appropriated $2.23 billion.

New Jersey’s education system is of specific interest to us for a number of reasons. For one, New Jersey is one of the highest spending states in the nation in terms of total education expenditures per pupil. Additionally, the state’s unique legal and political history has made it the paramount example in any analysis of the disparity between poor urban districts and their wealthy counterparts. In an unprecedented ruling, the 1997 Abbott v. Burke litigation ordered a significant increase in funding for the thirty (now thirty-one) high-poverty urban districts, known as the Abbott Districts, while the remaining New Jersey districts were subject to a different funding formula. In fact, as of the 2009-10 school year, the thirty-one Abbott Districts received 50 percent of the total state aid funds distributed to the nearly 600 districts in our data set. This ruling, as well as many others like it, makes New Jersey a natural forum to explore the ways different districts respond to the hardships of recessions.

We assess the effects of the Great Recession and the ARRA federal stimulus period using a rich panel data set and trend-shift analysis. In our staff report, the 2008-09 school year captures the onset of the recession because local, state, and federal governments finalize their budgets in the spring prior to the budgeted year, and the recession officially began in December 2007. The 2009-10 school year constitutes the federal stimulus period because almost all of the stimulus funds were spent during that year.

Our analysis yields some compelling results. Foremost, there is strong evidence of a downward shift in both revenues and expenditures—relative to the previous ten-year trend of the corresponding variable—following the recession in New Jersey (see chart below). However, the ARRA federal stimulus seems to have helped in 2009-10—while revenues and expenditures still exhibit declines, they are somewhat smaller than they were in 2008-09. 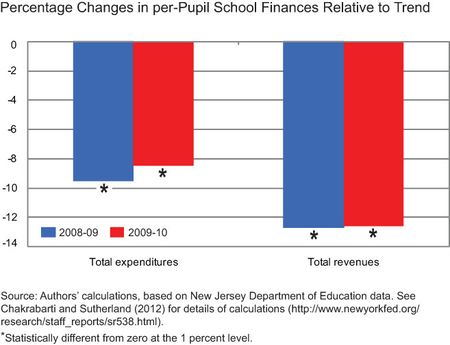 While total revenues declined relative to trend, the various components of revenues did not witness symmetric changes; instead, there were some interesting compositional shifts. The infusion of funds through the federal stimulus occurred simultaneously with statistically and economically significant cuts in state and local financing, especially the former.

In contrast to state and local aid per pupil, there was an upward shift in federal aid per pupil in 2009-10 following the introduction of the ARRA funds. Without the support of the federal stimulus in 2009-10, total aid to districts would have declined even further. Given this influx of federal funds, districts began to rely more heavily on federal aid and less on state and local revenues than in years past.

We now delve deeper to investigate how the different components of expenditures were prioritized when revenues declined (see chart below). Our results show a compositional shift in expenditures in favor of categories that are linked most closely to student learning. The categories instructional expenditures, student services, and student activities were preserved in 2009-10 when districts received ARRA funding.

In contrast, transportation and utilities and maintenance expenditures declined, suggesting that New Jersey prioritized the preservation of the expenditure categories with closest proximity to the classroom. 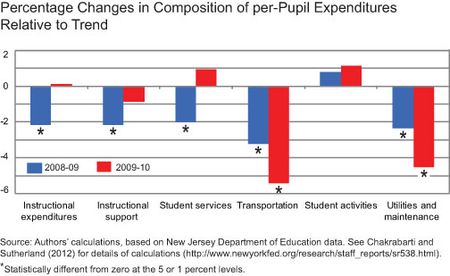 Our results also suggest some interesting patterns in the education labor market. Median teacher salaries show a positive shift in both years after the recession while median teacher experience also increased (see chart below). This is consistent with a significant increase in layoffs of untenured teachers, which would intuitively shift the teacher salary distribution to the right. As revenue streams were depleted, New Jersey’s law for tenured dismissal—a law that makes layoffs much less likely for any worker past his or her third year of employment—appears to have taken priority in officials’ decisions regarding teacher job preservation. 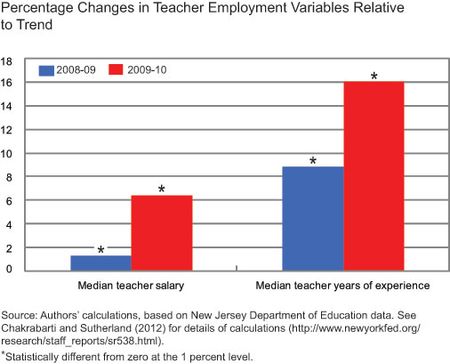 With the ARRA funds now depleted, it is important to ask how we might expect the state to fare in the near future. The chart below helps answer this question by illustrating the budgeted amount for total revenues per pupil in the United States and in New Jersey through 2012.

Unfortunately, the picture is bleak. There is evidence of a decline in budgeted revenues after 2010, and if history is a guide, actual revenues will likely be less than budgeted. The chart also shows that the New Jersey Treasury has budgeted for steeper declines in 2011 compared with the U.S. Treasury’s budget for the nation as a whole. New Jersey’s published budget for the 2011 school year explicitly states that funds were not available to replace the ARRA federal funding of the prior year.

The allocations required by the state’s funding formula (SFRA) were not met, and though the actual data for 2011 ar
e currently unavailable, the budget shows statewide declines, with many districts’ aid decreasing as much as 5 percent from the previous year. Cuts were made in many expenditure categories: The planned expansion of the preschool program was stalled, extraordinary special education costs and nonpublic-school aid reflected a 15 percent reduction from the projected need, debt service aid was reduced 15 percent, and funding for adult education was cut entirely. Data from the Department of Education show that the number of full- and part-time public school teachers in New Jersey dropped 4 percent in 2011 while the number of administrators fell 7 percent. 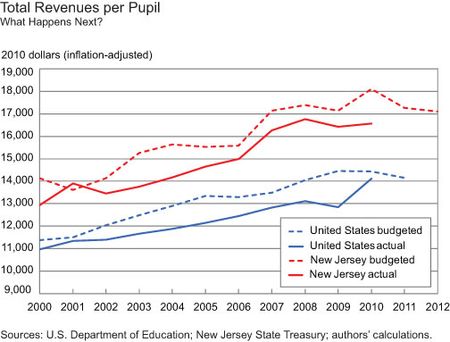 With slow economic growth predicted for 2012, school districts in New Jersey and elsewhere will likely face hard decisions that could include cuts in the salient instructional expenditures category. How well New Jersey’s students are prepared to compete in tomorrow’s marketplace will depend at least partly on the choices made today by the state’s policymakers and educators.

*Sarah Sutherland is a research associate at the Federal Reserve Bank of New York.