« The Odd Behavior of Repo Haircuts during the Financial Crisis | Main | Historical Echoes: 150 Years after the Morrill Act »

Data from the State Higher Education Executive Officers (SHEEO) show that, from 2000 to 2010, public funding per pupil, defined as state and local support for public higher education per pupil (excluding loans), fell by 21 percent, from $8,257 to $6,532 (all numbers presented in this post have been adjusted for inflation and reported in 2011 dollars; also note that public funding includes federal funds from the American Recovery and Reinvestment Act, ARRA, available since 2009). Funding patterns differ markedly, however, across the states: In 2010, the percentage change in public funding per pupil from the previous year ranged from -18.0 percent to +16.7 percent. For example, while public funding decreased 7.5 percent in New York, it fell 11.6 percent in California. Public funding increased the most in North Dakota (16.7 percent), followed by Texas (6.6 percent).

In light of this variation at the state level, we assign each state to a group based on the rate of change in public funding. For each fiscal year from 2001 to 2011, we rank the states based on the percentage change from the previous year in public funding per pupil and categorize them in one of three groups. Group 1 comprises the seventeen states that have the most negative (or least positive) changes in public funding in that year, Group 2 consists of the sixteen states with moderate changes, and Group 3 has the seventeen states that have the most positive (or least negative) changes. In other words, for a given year, states in Group 1 experienced the most unfavorable changes in funding. Since a state is assigned to a group based on changes in public higher education funding in that given year, it may move from one group to another. In fact, forty-seven of the fifty states have been in each of the three groups at some point during the 2001-11 period. For example, while New York placed in Group 3—the group with the most favorable changes in public higher education funding—during 2005-08 when funding grew by about 6 percent on average each year, it moved to Group 1 in 2008 when it experienced funding growth of only 0.36 percent. It then returned to Group 3 in 2009 when it experienced a 1.3 percent decline in funding (compared with a national decline of 5.7 percent).

The chart below illustrates the average percentage change in funding per pupil by group. It is remarkable that, on average, in every year during the 2001-11 period, at least a third of the states experienced funding cuts, and in more than half of those years, two-thirds of the states did. Moreover, aggregate directional trends are roughly the same across all groups, with a constant gap of about 13 percentage points between Group 1 and Group 3 states. As seen in the chart, the distribution of funding changes shifts upward significantly during 2005-08, the boom years, and then shifts downward during the recession years. In fact, since 2008, total public funding for higher education has declined by 14.6 percent. 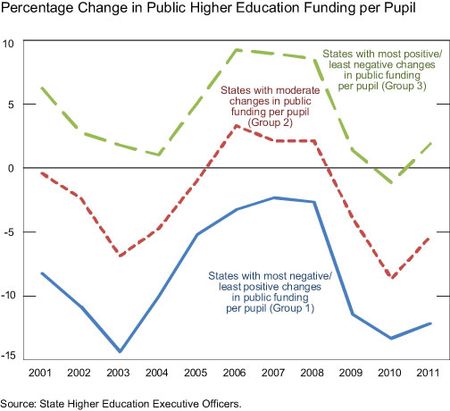 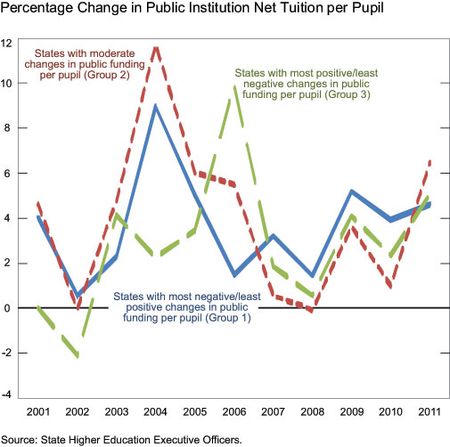 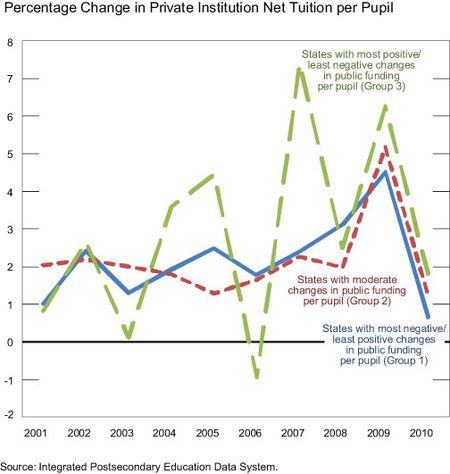 In the public discourse, federal funding is often blamed for driving up tuition. However, our analysis suggests that public schools are increasing tuition as a way to make up for decreasing state and local appropriations for higher education, and that deeper cuts in public funding may be associated with correspondingly greater tuition hikes. How much change in public institution tuition is caused by a 1 percent change in public funding is a question that is much harder to answer. The reason is that public institutions can make up for the shortfall in revenues from the states in many ways aside from raising the tuition price: they can lay off instructional, administrative, or other types of staff; or they may even eliminate specific programs from their academic curriculum. Finally, a state school may be inclined to accept a greater proportion of out-of-state students, who pay more in tuition than in-state students; however, additional analysis we conducted fails to find evidence of this over the years 2001-10.

State and local appropriations for public universities and colleges have been declining since 2000, while net tuition at public schools has grown substantially both in real terms and relative to private tuition growth. Our post presents strong suggestive evidence that decreases in state and local appropriations are associated with increases in net tuition at public schools, particularly in recent years. This finding is troubling, since public universities and colleges may face even greater financial strain in the years to come as ARRA federal funding shrinks. For the college student, this means shouldering more of the financial burden, including the possibility of taking out ever larger student loans.

Rajashri Chakrabarti is an economist in the Regional Analysis Function of the New York Fed’s Research and Statistics Group.


Maricar Mabutas is a former senior research analyst in the Microeconomic Studies Function of the Research and Statistics Group.

Basit Zafar is an economist in the Microeconomic Studies Function of the Research and Statistics Group.

Posted by Blog Author at 07:00:00 AM in Education, Fed Funds, Fiscal Policy

The limited variables and time frame for analysis in this study render its conclusions quite limited and less than helpful.

The rate of excessive tuition growth (as defined as the rate above CPI) for 2001 to 2011 is only slightly higher than the rate for the previous 20 years (4% for 1981-2001 vs 4.2% for 2001-2011). Confining the analysis to the period of declines in state support for high ed ignores the fact that the ballooning of that support in the previous 20 years resulted in tuition hikes of a nearly identical magnitude.

. I would imagine there to be a connection between more easily attainable student loans and tuition spikes as well.

I think it would also be interesting to research the effect of easily attainable federal loans to the tuition charged at public and private institutions. I would imagine there to be a connection between more easily attainable student loans and tuition spikes as well.