« Just Released: The Geography of Student Debt | Main | Historical Echoes: The “Mississippi Bubble” – When One’s Back Could Be Rented Out as a Writing Desk »

My Two (Per)cents: How Are American Workers Dealing with the Payroll Tax Hike?

The payroll tax cut, which was in place during all of 2011 and 2012, reduced Social Security and Medicare taxes withheld from workers’ paychecks by 2 percent. This tax cut affected nearly 155 million workers in the United States, and put an additional $1,000 a year in the pocket of an average household earning $50,000. As part of the “fiscal cliff” negotiations, Congress allowed the 2011-12 payroll tax cut to expire at the end of 2012, and the higher income that workers had grown accustomed to was gone. In this post, we explore the implications of the payroll tax increase for U.S. workers.

The impact of such a tax hike depends on two factors. One, how did U.S. workers use the extra funds in their paychecks over the last two years? And two, how do workers plan to respond to shrinking paychecks? With regard to the first factor, in a recent working paper and an earlier blog post, we present survey evidence showing that the tax cut significantly boosted consumer spending, with workers reporting that they spent an average of 36 percent of the additional funds from the tax cut. This spending rate is at the higher end of the estimates of how much people have spent out of other tax cuts over the last decade, and is arguably a consequence of how the tax cut was designed—with disaggregated additions to workers’ paychecks instead of a one-time lump-sum transfer. We also found that workers used nearly 40 percent of the tax cut funds to pay down debt.

To understand how the tax increase is affecting U.S. consumers, we conducted an online survey in February 2013. We surveyed 370 individuals through the RAND Corporation’s American Life Panel, 305 of whom were working at the time and had also worked at least part of 2012.

Did Individuals Notice the Tax Increase?
We began by asking respondents whether they noticed any change in their take-home pay since December 2012. Fifty-five percent reported a decrease, thirteen percent saw an increase, and the remainder reported no change. Nearly two-thirds of higher-income individuals (those with annual household income exceeding $75,000) in our sample reported a decrease in their take-home pay, compared with only half of lower-income individuals. Since many factors may affect take-home pay, such as changes in income, insurance premiums, or state taxes, we asked about specific factors that led to such changes. Sixty-three percent of respondents reported that an increase in federal tax withholdings played a role. Moreover, when asked specifically about the change in the Social Security tax, two-thirds of our respondents were aware of the increase.

How Are Consumers Planning to Cover the Tax Increase?
We asked respondents to indicate the share (out of 100 percent) of the lost income that they would cover by cutting spending, increasing debt, and reducing saving. The vast majority (79 percent) planned on mostly cutting consumption, with around 20 percent mostly cutting savings and 2 percent mostly increasing debt (borrowing).

We also asked how survey respondents had used the extra income from the tax cut during 2011-12. This allows us to analyze how plans to cover the decrease in income starting in January 2013 relate to what individuals had actually done with the increase in income during the last two years. For this comparison, we divide respondents into three groups—those who reported they had mostly consumed (that is, spent) the increased income, those who had mostly saved it, and those who had mostly used it to pay off debt.

Based on that classification, the chart below shows what these respondents are planning to do now that their income has decreased. We see a disproportionate shift toward primarily reducing spending. Regardless of what consumers reported doing with the increase in take-home pay over the last two years, a majority report that they will cut back on spending. For example, 86.2 percent of respondents who mostly consumed the extra funds from the tax cut plan to mostly cut spending now, and 80.0 percent of those who used the extra funds mostly for paying off debt now plan to mostly reduce spending. The chart also shows a (weak) positive relationship between past usage of the extra funds and intended plans to cover the tax increase, with those who saved the extra income being more likely to mostly cut back on saving now (31.8 percent, versus 14.0 percent for their counterparts), and those who mostly paid off debt somewhat more likely to mostly increase their debt now (4.3 percent, versus 0.76 percent for their counterparts). 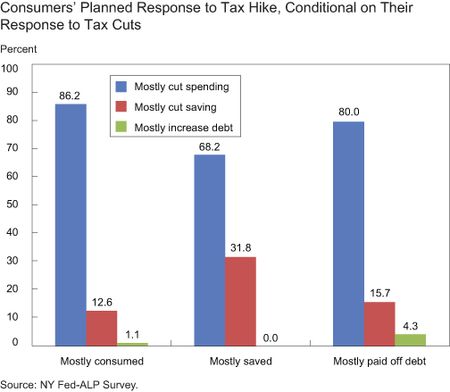 How Will the Tax Hike Affect Consumption Spending by Richer and Poorer Households?
Policymakers are particularly interested in the marginal effect of a tax hike on spending—for every dollar that consumers lose, how much less will they consume? This is known as the marginal propensity to consume (MPC). We can estimate the MPC for the tax cut of 2011-12 and for the tax increase in 2013 (see table below). The average MPC for the tax cut was 0.38; that is, on average consumers reported that they had spent 38 percent of the additional income. For the average household making $50,000 (which received an additional $1,000 per year during the two-year tax cut), this means an extra $380 of annual spending during 2011-12. This estimate is almost identical to the one we found in a survey that we conducted in early 2011 with a different set of individuals. However, the planned average MPC for the tax hike in our sample is -0.72; that is, consumers are planning to cut spending on average by 72 percent of the tax increase. For the average household making $50,000, this would mean cutting annual spending by around $720. In response to the tax hike, we find that on average individuals plan to cut saving by 25 percent of the tax hike and increase debt by 3 percent, whereas when the tax cut was in place they saved 29 percent of it and used 33 percent to pay down debt. The figures in the table indicate that consumers are likely to cut spending sharply and to slow the paydown of debt.

There is substantial heterogeneity in the response of different demographic groups to the tax hike. For example, lower-income individuals (annual household income of $75,000 or less) report a sharper planned reduction in spending (by 77 percent of the income loss, versus 64 percent for higher-income individuals). Similarly, higher-income individuals plan to reduce their saving by a higher proportion than lower-income individuals do. This reported behavior is interesting because it’s very different from how the two group
s reported using the tax cut: the average MPC for low-income respondents for the tax cut was in fact lower than that for higher-income respondents (0.33, versus 0.46), and their propensity to pay down debt was substantially higher (0.41, versus 0.20). In a companion survey, we also found that low-income respondents are more heavily indebted than their counterparts and expect to face binding liquidity constraints in the future. This heterogeneous behavior is then quite sensible, since low-income individuals expect that they cannot really borrow much more, and so use a large portion of any additional income to pay down their existing debt, and plan to cover any reduction in income by reducing their spending.

Will Survey Respondents Follow Up on Their Plans?
It’s still early in the year, and as more months of macroeconomic data become available we’ll be able to see whether the responses we observe in our survey are reflected in the macroeconomy. However, because of several confounding factors (such as the fiscal cliff and budget negotiations), it will not be straightforward to assess the impact of the tax hike on consumers from any time series analysis of such aggregate measures. Therefore, use of survey data is probably the best approach to evaluating the impact of tax changes. The micro evidence reported here is based on consumers answering these questions meaningfully; for the 45 percent of respondents who don’t see a decrease in their take-home pay, this may not be straightforward. However, while consumers may not be able to accurately predict their actual behavior, two previous studies have shown that planned behavior elicited in surveys tends to be a good predictor of actual behavior.

Overall, our analysis suggests that the payroll tax cut during 2011-12 led to a substantial increase in consumer spending and facilitated the consumer deleveraging process. Based on consumers’ responses to our recent survey, expiration of the tax cuts is likely to lead to a substantial reduction in spending as well as contribute to a slowdown or possibly a reversal in the paydown of consumer debt. These effects are also likely to be heterogeneous, with groups that are more credit and liquidity constrained more likely to be adversely affected. Such nuances may be lost in the aggregate macroeconomic statistics, but they’re important for policymakers to consider as they debate fiscal policy.

Max Livingston is a research analyst in the Research and Statistics Group.