The Growth of Murky Finance

This post is the fifth in a series of thirteen Liberty Street Economics posts on Large and Complex Banks. For more on this topic, see this special issue of the Economic Policy Review.

Building upon previous posts in this series that discussed individual banks, we examine the historical growth of the entire financial sector, relative to the rest of the economy. This sector’s historically large share of the economy today (see chart below) and its role in disrupting the functioning of the real economy during the recent financial crisis have led to questions about the social value of costly financial services. While new regulations such as the Dodd-Frank Act impose restrictions on financial activities and increase their costs, especially those of large firms, our paper  suggests that there may be limits to what regulation can achieve. In particular, we show that financial growth has occurred in the more opaque and harder to regulate sectors: private firms, shadow banks, and small nonbank financial firms. Moreover, we find that the stock market values these opaque areas of finance more, suggesting that they may expand even faster in the future.

Rise of Finance and Shadow Banks
We measure the relative size of the financial sector by the value of its assets (the market value of equity plus the book value of debt), relative to the value of assets in the business sector (that is, the financial and nonfinancial sectors). This measure, Tsize–qmv (in the chart below), includes only publicly listed firms, and is estimated at the firm level. A second measure, Fsize (also in the chart below), is the total liabilities (generated by all transactions, not just those of publicly listed firms) of the financial sector, relative to the total liabilities of the business sector, and is estimated at the sectoral level.

By either measure, the financial sector has been a growing part of the economy. It has mostly increased in relative size over the past four decades, interrupted in a major way only by the recent financial crisis (see chart below). On average, the financial sector has accounted for about 50 percent of the asset values of publicly listed firms, but roughly 70 percent of total business sector liabilities. Hence, one reason to worry about the size of this sector is its high representation among private firms that have virtually no transparency. 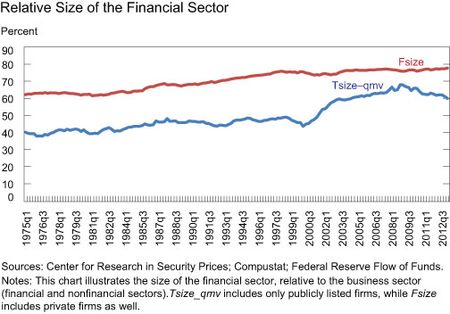 The Relative Size of Shadow Banking
The shadow banking sector comprises specialized financial institutions (such as asset management and securities firms) that perform credit intermediation services similar to traditional banks or depository credit institutions (DCIs), but without the explicit central bank liquidity support or public sector credit guarantees received by DCIs. Pozsar, Adrian, Ashcraft, and Boesky argue that shadow banks contributed to the crisis through their excessive expansion of credit backed by illiquid assets. Consistent with their argument, we find that this sector has grown rapidly from about 8 percent of total business sector liabilities in 1975 to about 36 percent just before the crisis in 2007 (see chart below). For publicly listed firms, asset values increased from 4 percent to 15 percent during the corresponding period. Thus, similar to the financial sector in general, shadow banks make up a larger share of the liabilities of private firms than of publicly listed firms. 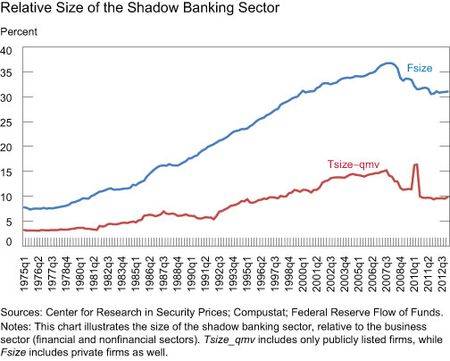 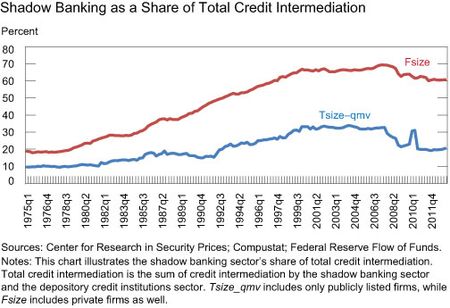 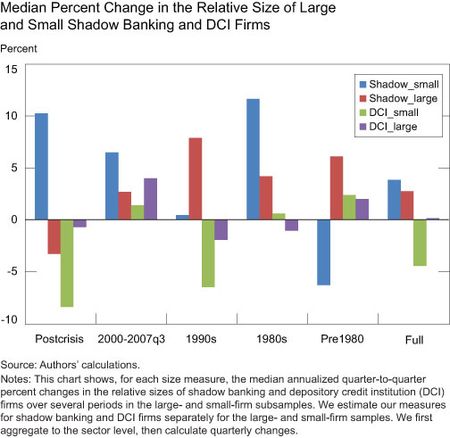 Effect of the Recent Financial Crisis
The recent financial crisis reversed the steady growth of the financial sector in the economy. Shadow banking firms fared particularly poorly in the crisis, as their share in the economy shrank more than 6 percentage points from the pre-crisis peak to the crisis trough quarters. In comparison, financial firms in general shrank about 2 percentage points and large DCIs actually grew in size, especially during periods of government support such as when the FDIC debt guarantee program was in effect.

Financial firms have had a lower valuation relative to business sector firms since the late 1980s, except for a brief period in 2000, and their relative valuation has been steadily declining since around 2003 (see chart below). Within the financial sector, however, shadow banking had a higher valuation than the business sector for the entire sample, and their relative valuation has been increasing since around 2003. The reverse is true for DCIs. These results suggest that the market expects shadow banks to grow faster than DCIs and/or to generate a more stable stream of earnings in the future. 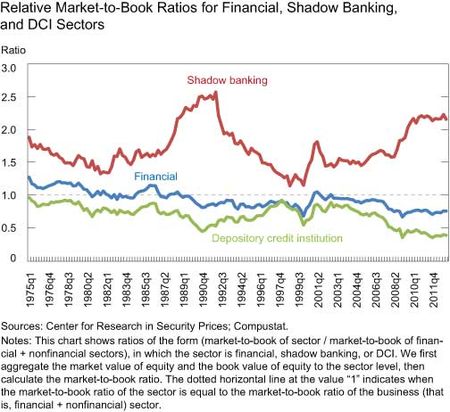 Conclusion
Although the policy response to the growth and vulnerabilities of the financial sector has been to enhance supervision and regulation of large firms and visible financial sectors, our paper documents that, historically, growth has occurred mainly in areas outside the current regulatory ambit. If financial transactions migrate out of regulated sectors, as expected by some, then this trend is likely to persist. We need to improve our knowledge of these opaque financial sectors in order to understand what risks (if any) they pose to the economy.

Samuel Antill is a senior research analyst in the Federal Reserve Bank of New York’s Research and Statistics Group.

Thanks for your comments. With regard to your first comment, in our shadow banking sector, we include asset management firms involved in credit intermediation (e.g., open-end investment funds) but exclude those that are not (e.g., investment advice, portfolio management). Table B.1 in our paper(http://www.newyorkfed.org/research/epr/2014/1412anti.pdf) reports the industries making up shadow banking. However, it seems unlikely that valuations of asset management firms are driving our results because, in our sample, they contribute less than 4% of shadow banking sector assets on average (see Table 4 in our paper http://www.newyorkfed.org/research/epr/2014/1412anti.pdf). Regarding your second comment, please note that the valuation trends (referred to in your quote) are evident since 1975 and are not specific to the recent financial crisis period.

With regard to the following statement: “Within the financial sector, however, shadow banking had a higher valuation than the business sector for the entire sample, and their relative valuation has been increasing since around 2003. The reverse is true for DCIs. These results suggest that the market expects shadow banks to grow faster than DCIs and/or to generate a more stable stream of earnings in the future.” I think you may be missing several factors in your assessment of the valuation of SBIs vs DCIs. Firstly, are you incorporating valuations of fund management companies in your universe. Non asset owning fund managers are fee businesses which would command very different valuations. Further, the book values of DCIs currently include enormous legacy assets on the portfolio side which the market has great difficulty in valuing and assumes are being carried at levels that are vulnerable, if not actually overstated. These legacy assets stem from the bubble and will clear eventually, as which time you can expect valuations to improve. (of course, on the other hand, even a modest recession might seriously adversely impact bank balance sheets in the interim, with respect to such vulnerable legacy assets on the portfolio side of DCIs).

Shadow banking is not “bad.” Non-bank financial institutions represent the PRIVATE SECTOR. The TBTF banks + GSEs are a government protected PUBLIC monopoly. The last vestige of Glass Steagall is the BANK HOLDING COMPANY ACT which protects the TBTF FIs and their mediocrity. Of course the TBTF banks take on more risk because they are inherently unprofitable. Negative risk-adjusted returns. We need to repeal the bank holding company act and allow non-banks to break up the TBTF banks. Let Google, WalMart, fix the problem.