« Just Released: Mortgage Borrowing among Most Creditworthy Abates | Main | The Class of 2015 Might Have a Little Better Luck Finding a Good Job » 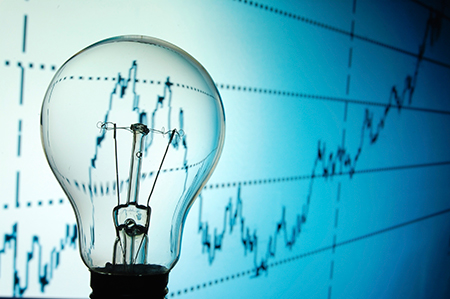 In our earlier post, we described how the tri-party repo arrangement was a clever way to reduce the costs and risks that individual firms faced when settling bilateral repos. In this post, we explain how the efficiencies created by this new arrangement facilitated the growth of the repo market by expanding the class of securities to be used as collateral. This expansion had benefits as well as costs. On the positive side, it led to lower interest costs for a wide variety of borrowers in the real economy. But on the negative side, tri-party repos backed by riskier assets increase the risk of fire sales, which can have negative spillovers on the broader financial system.

While tri-party repo was originally conceived as a way to finance Treasury securities, several developments in the mid-1980s fostered growth in the trading and issuance of agency mortgage-backed securities (MBS) and prompted the growth of tri-party repo as a means to finance MBS. First, book-entry settlement on Fedwire began for agency MBS, contributing to an explosion in the volume of trading in those securities. Second, the enactment of the Secondary Mortgage Market Enhancement Act in 1984 allowed banks and Department of Labor-regulated pension funds to invest in rated MBS. Third, enactment of the Tax Reform Act of 1986 permitted the creation of real estate mortgage investment conduits (REMICs), special purpose vehicles to facilitate the issuance of mortgage pass-throughs. Bilateral repo financing for MBS had always been expensive and fails were common. These problems became even more important as the agency MBS market grew. Given the complexity of clearing and settling MBS, the benefits of tri-party repo became more obvious and tri-party funding of MBS increased. Irving Trust, the clearing bank for Salomon Brothers’ agency trades, was the first to extend tri-party repo to agency MBS. The other clearing banks—Bank of New York (BNY), Security Pacific National Bank, Chase Manhattan, Marine Midland, and Manufacturers Hanover—followed.

The tri-party market was further supported by the enactment of the Bankruptcy Amendments and Federal Judgeship Act of 1984, which exempted repos on Treasury and federal agency securities, as well as bank certificates of deposit and bankers’ acceptances, from the automatic stay of the Bankruptcy Code. This change in law made repos against these types of securities more liquid, and safer for the lender of cash, who can immediately take possession of the securities and sell them to repay their loan. Fed Chairman Volcker supported the exemption, which was opposed by the Department of the Treasury at the time.

As large dealers came to hold larger global bond inventories, the demand for cross-border repo financing grew and the tri-party concept that had developed in the United States was replicated in Europe as a way for U.S. firms to get access to nonfinancial corporate cash providers in Europe. The year 1991 marked the first cross-border tri-party repo transaction, with Morgan Stanley’s London broker-dealer subsidiary as the borrower, BNY as the tri-party agent, and lending from the Bank of New Zealand in U.S. dollars, against U.S. Treasuries and Eurobonds. BNY worked with Euroclear as custodial link for the Eurobond collateral. The transaction required U.K. legal opinions to ensure perfection of a security interest in the dealer’s collateral. In 1992, BNY started offering tri-party repo services in Europe. Within a few years, BNY began to build its global tri-party repo platform and connections to other central securities depositories, in response to market demand for the ability to conduct repo settlements across different jurisdictions with different central securities depositories and trading and settlement timeframes. Initial work focused on Europe, first with Euroclear and later with Clearstream. Subsequent work established the ability to conduct tri-party repo financing of Japanese government bonds in 2002.

The next collateral class to make its way into the tri-party market was equities. In 1998, BNY began to facilitate the acceptance of equities as tri-party repo collateral. This development brought additional interest from investors into tri-party repo, and was of great interest to the Chicago Mercantile Exchange as it enabled the exchange to permit its members to post equities as collateral.

In the mid-2000s, legal changes and financial innovation further spurred the growth of tri-party repo. The Bankruptcy Abuse Prevention and Consumer Protection Act of 2005 expanded the exemption from the stay for bankruptcy to a wide range of repo collateral beyond government securities, certificate of deposits, and bankers’ acceptances. The rise of prime brokerage activity also contributed to growth in repo against non-government securities; dealers needed to finance securities they provided funding against to prime brokerage clients. And, given the changes to bankruptcy law that enhanced the liquidity of repo in this period, the growth of securitization prompted growth in the use of repo by dealers to finance holdings of these securities.

Together, these developments led to the explosive growth of the tri-party repo market (see chart below). The market, estimated at about $800 billion in 2002, more than tripled by 2008, when it peaked at about $2.8 trillion. 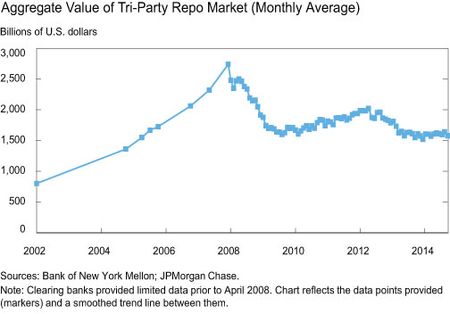 A variety of collateral is used today (see below), although Treasury securities and agency MBS still account for almost two-thirds of the collateral financed. That said, about 25 percent of the collateral in the tri-party market is made up of privately issued assets, such as corporate bonds, and equities. This share has been fairly stable over the past few months, but the share of nongovernment securities has been rising slowly over the past few years. 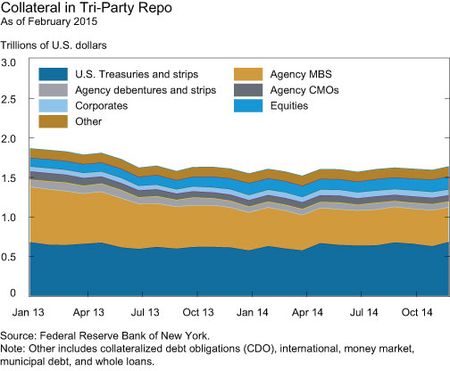 There are costs and benefits to having a more diverse set of collateral in the tri-party repo market. On the plus side, the efficiencies of the tri-party mechanism allow more collateral to be financed, reducing the cost of issuing these securities and thereby stimulating more intermediation, which supports more economic growth. Unfortunately, the large portfolios of risk assets that are financed in the tri-party repo market also create a risk of fire sales, as we argue in a Staff Report with Brian Begalle and Jamie McAndrews. In that paper, we argue that there are ways to manage the fire-sale risk that would preserve most of the benefits of tri-party repo while going a long way toward mitigating the costs.

Financial markets are always evolving, and that innovation often contributes to the dynamism of our economy. However, there can be downsides to innovation. The risk-reducing innovations of yesterday can become the systemic risk drivers of tomorrow, if they engender rapid growth in activity without corresponding attention to the implications of that growth for financial system stability and safety.