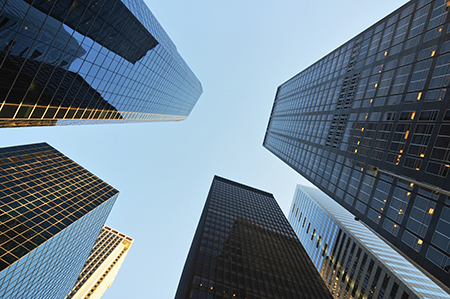 Only 0.4 percent of all banks established in the United States and still operating in 2007 (before the crisis) exceeded the $50 billion in assets necessary to be classified as systemically important financial institutions (SIFIs) under Dodd-Frank. The majority of banks are either acquired or fail (although acquisitions far outnumber failures) before they become $50 billion banks, and very few of those that do survive actually become that large. The few banks that have become SIFIs have accumulated assets for more than a century and have outgrown nonfinancial firms in almost all time periods, not just following episodes of deregulation. Becoming a large bank requires decades of superior performance relative to other firms in the industry (Gupta, Harris, and Mehran, 2015, “Restructuring in the Financial Services Industry,” unpublished). Performance makes the acquisition of other firms far easier, and large firms are frequent acquirers.


In the table below, we provide statistics on bank creation and survivorship for the four five-year intervals from 1986 to 2005 (we stop in 2005 to focus on the pre-crisis period). Survivorship rates are surprisingly low (column 5); more than half of the banks that opened ledgers between 1986 and 1995 no longer existed in 2007, having either failed or been acquired sometime before the financial crisis. Survivorship rates are higher for 1996-2005, though these rates are biased upward because newer institutions have had less time to fail. Accordingly, we also include standardized survival rates eight years after opening for each time interval (column 4); these are all about 65-70 percent, except for those opening between 2001 and 2005, which have an eight-year survival rate of only 57 percent, perhaps because the financial crisis caused an early demise for these young banks. 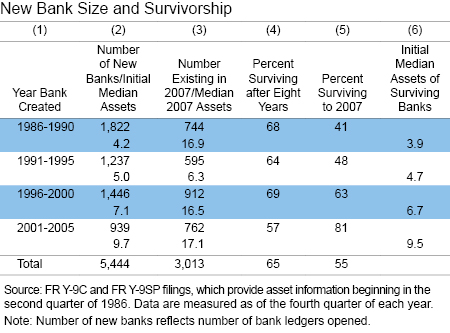 Notice that asset growth among survivor banks is not particularly rapid (columns 2 and 3). For banks that opened in 1986-1990, for example, median nominal assets grew from $4.2 million at opening to $16.9 million in 2007, an average compounded growth rate of just 7.2 percent per year. Furthermore, the survivors were actually slightly smaller (by initial assets) than all banks that opened in the same time period (column 6), suggesting that initial size does not necessarily enhance survivorship odds.


The table below shows that the six largest banks in the United States as of 2007 all opened during the 1800s or early 1900s. Even the “youngest” of these institutions (Wachovia) was established by 1908.

The table below compares growth rates for the largest banks and the largest “old” nonfinancials that also went public by the early twentieth century. The top five banks (based on the order listed above) have grown considerably in recent years; for example, from 1995 to 2000, their combined assets grew 193 percent. 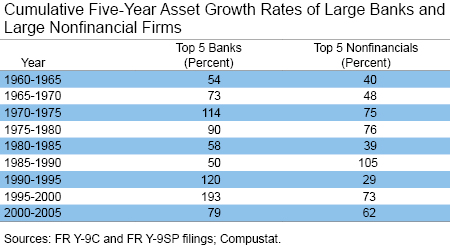 Could the rapid growth of banks in recent decades simply reflect deregulation such as the Riegle-Neal Act of 1994, which eliminated restrictions on interstate banking and branching, and the Gramm-Leach-Bliley Act of 1999, which repealed Glass-Steagall? The comparisons noted previously show that banks outgrew nonfinancials by large margins even before the period of deregulation; in fact, some of the largest growth spurts occurred before the passage of Gramm-Leach-Bliley and before the full impact of Riegle-Neal was felt.

While this post focuses on bank size and age, it is helpful to know not just which banks are systematically important but also how they became so, given that the failure of very large banks can threaten financial stability. We have shown that the growth process is neither common nor quick; it requires many decades, if not centuries, and substantial persistence. This slow pace of growth reinforces the importance of institutional culture in determining which banks become large. While our data do not speak to culture and its evolution at the largest banks, two important contributing factors in the longevity of these banks are an institutional focus on growth and the managerial abilities of generations of CEOs. As Gary Becker reminds us in his 1971 Economic Theory, “Greater efficiency can stem from superior managerial and other entrepreneurial abilities . . . there are only a small number of Wilt Chamberlains and Lew Alcindors in basketball, or Henry Fords in the automobile industry.” In addition, the success of certain banks may be related to the persistence of culture, which is encouraged through internal succession because it allows banks to be incubators of managerial ability and selection. The long horizon of these surviving banks provides a natural laboratory for studying the culture of succession among management that has contributed to their growth and survival.

We have shown that the largest banks have long histories, and that the likelihood of any bank becoming large is low. During the crisis, certain large banks were unsustainable in the absence of government support or assistance. As such, regulatory efforts implemented in the wake of the crisis, such as capital and liquidity requirements and stress tests, may enable large institutions post-crisis to manage operations and risk more effectively and to continue to survive. A question for researchers is whether the post-crisis banking concentration will prevail and whether the large banks that drive this concentration will continue to get older with the age of the nation.

Rajlakshmi De is a senior research analyst in the Federal Reserve Bank of New York’s Research and Statistics Group.

By some measures Capital One Bank is the fifth largest bank by deposits, yet it views itself as founded in the late 1980s as a back operation in a small bank that grew into a large bank. If you asked its founder and current CEO, he would not say that he views his bank as being a century old. Capital One was only created as an independent company in the mid-1990s, and, although it acquired older banks over time, it has its unique corporate culture based on an Information Based Strategy (IBS) that has not been diluted by acquisitions. Even until the mid-2000s it still had a start-up culture, which was tempered by adversity and experience. Capital One’s ability to shake up banking pressures its competitors to innovate and adapt. Your thesis that all major banks are a century old and therefore slow to adapt ignores significant corporate history.

I wonder though, if this confuses “growth,” which can be acquisitional or organic, with strictly organic growth. All of these SIFIs are an amalgam of banks that were formed at different times. Rather than attributing their large asset growth rates to consistent managerial superiority, I think it’s just as likely that these old banks were early and large survivors of crises in the 19th and early 20th century. By being some of the largest banks already in the 20th century, they were the most likely banks to acquire other banks, growing their balance sheet. The system was set up for exponential growth: the larger they are the more likely they are to get larger, so the largest early players are most likely to be extremely large today. It’s not because of management, but because the industry is set up to make it easier to acquire your competitor than take his business.