Second in a five-part series

“Flash events,” extremely large price moves and reversals over just a few minutes, have occurred in some of the world’s most liquid markets in recent years. What’s made these events remarkable is that they seem to have been unrelated to any discernable fundamental economic news that may have taken place during the events. In this post, we consider a few of the important similarities and differences among three major flash events in the U.S. equities, euro–dollar foreign exchange (FX), and U.S. Treasury markets that occurred between May 2010 and March 2015. All three flash events involved high trading volumes and long-term impacts on depth, but the U.S. Treasury event stands out in terms of both price volatility and price continuity.

The three events are summarized in the table below. Other notable recent events, such as the abandonment of the Swiss National Bank exchange rate floor on January 15, 2015 (FX), or the “taper tantrum” following Federal Reserve Chairman Bernanke’s testimony to Congress on May 22, 2013 (Treasuries), were clearly related to specific news announcements and therefore are less relevant as examples of flash events. However, it is worth noting that price movements in the flash events we describe were comparable to the movements seen following significant news announcements. 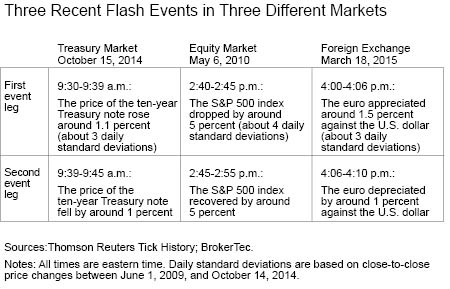 While much has been written about each of these events and their broader implications for market functioning and liquidity, we focus narrowly on four specific metrics of trading activity that allow qualitative comparisons across events.

The chart below plots the volume of contracts traded per second during each event, along with the price. Volume per second rose substantially in all three events, especially during their initial legs, with the rebound in each case occurring amid much lower volume.

The three events had persistent, negative impacts on market liquidity, as measured by order book depth in the days following each event. The chart below shows the amount of standing limit orders at the top ten levels of the order book, with buy and sell limit order depth shown on the positive and negative axes, respectively, along with intraday price. Order book depth was substantially reduced during the days following each event, taking up to a week to return to pre-event levels. Perhaps more than the level of liquidity itself, such significant variations in the persistence and predictability of changes in market liquidity can be particularly challenging for market participants. 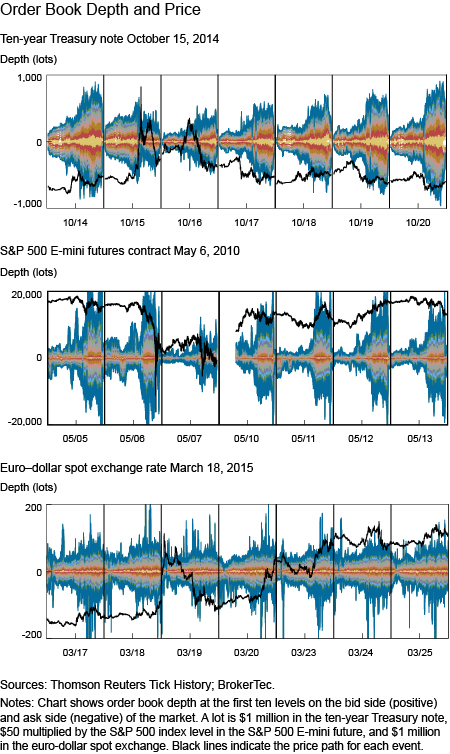 The chart below displays the intraday volatility during a three-hour window around each event, along with intraday price. As expected, volatility spiked during each event window. In addition, we observe the expected brief spikes in volatility around significant news announcements prior to the Treasury and FX events (marked by the vertical dashed lines). However, volatility in both cases remained elevated leading into the events, especially during the morning of the Treasury event. By contrast, there was no news announcement immediately preceding the equity event, and realized volatility remained relatively low right up until the event window. 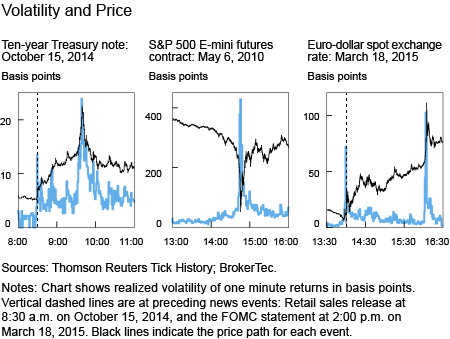 Notably, though, price continuity was much higher in the Treasury event than in the equity or FX events, in the sense that trades occurred at every price during each leg of the event (Panel A). A large amount of trading occurred at price levels near the very peak (Panel D).

In the equity event, pricing was similarly continuous, but trading dropped off rapidly as prices fell (Panel B). Compared to the Treasury event, much less trading occurred at each price level near the peak, especially during the initial drop in prices (which included a five-second trading halt) (Panel E).

The FX event, by contrast, was highly discontinuous in the spot market, as seen in Panel C. Only 116 trades occurred at a price above 1.10, at the very peak of the spot market (which corresponded to the price ceiling imposed by the Chicago Mercantile Exchange in the euro–dollar futures contract on the day). Above this price, no trades occurred at more than 70 percent of price points, while below the price ceiling, no trades occurred at 36 percent of price points during the ascent nor at 16 percent of price points during the descent, as seen in Panel F. A key reason for the dramatically larger price discontinuity in the FX spot market is a relatively small tick size compared with the other markets; price continuity in FX futures, which have double the tick size, was much higher. 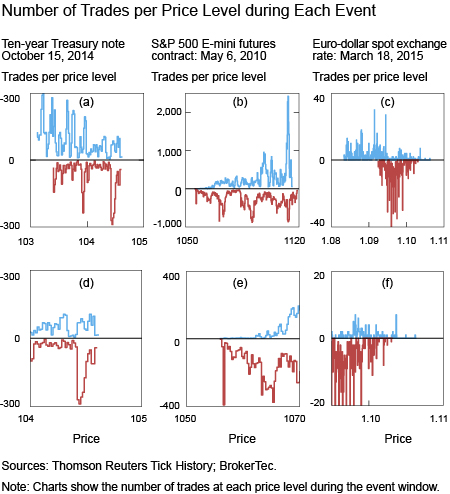 The three flash events we have analyzed unfolded in three of the world’s most liquid markets, and they were characterized by dramatic price changes over a few minutes that would normally play out over days, leading market observers to question the liquidity of these markets. These events shared a number of important properties but also differed in significant ways. In particular, all three events exhibited strained liquidity conditions during periods of extreme price volatility but the Treasury market event arguably exhibited a greater degree of price continuity, consistent with descriptions of the flash rally as “slow-moving.”

The Treasury bond, E-mini, and euro–dollar markets are similar in terms of trading infrastructure, primary participants (for example, large bank dealers and proprietary trading firms), market structure (anonymous central limit order books), and the substantial presence of automated trading. All three assets trade both in cash markets and as futures products, with the spot and futures markets tightly synchronized owing to significant cross-market spread trading. The many similarities between these three events should therefore perhaps not be entirely surprising.

Very interesting piece gentlemen, which clearly highlights the impact of electronic trading on market behaviour. I would be interesting in knowing how the flash event in EURUSD compares to general activity in the equivalent USDDEM 20 years ago when electronic trading was very much in its infancy. My instinct is that a 1.5% move happened a lot more often back then and as such the behaviour of market makers has possibly changed? Equally, a 1.5% move at such a thin time in the FX day – late NY afternoon – is not perhaps unusual if a large order hits the market, but does the 1% retracement suggest a greater presence of mean reversionist traders in the FX market than was previously thought? I would be fascinated to know how quickly it took liquidity providers to react across the events – i.e. is the ability of LPs to spot a large order improving to the degree that they withdraw from liquidity provision earlier – thus exacerbating the event at an earlier stage?