« A Distributed Version of Repugnance as a Constraint on Markets | Main | From the Vault: Understanding Puerto Rico’s Economic Challenges »

Since the peak of the recession, the unemployment rate has fallen by almost 5 percentage points, and observers continue to focus on whether and when this decline will lead to robust wage growth. Typically, in the wake of such a decline, real wages grow since there is more competition for workers among potential employers. While this relationship has historically been quite informative, real wage growth more recently has not been commensurate with observed declines in the unemployment rate.

Of course, there are several other important determinants of wage growth that are missing from this useful yet simplified correlation. Typically, an individual’s earnings path is thought of through the lens of a “job ladder” model. In this framework, a worker may enter the labor market unemployed, actively searching for a suitable job. Once securing employment, she can search on the job for better employment, and can be selective about which jobs to take because she has her current job as a fallback. One of these opportunities might lead to a better quality match and thus higher wages. At this point, the search might begin again, until an even better job is found, and wages grow yet again. Hence, we can think of workers climbing a job ladder through their working lives, with each rung of the ladder leading to better quality jobs and pay gains. 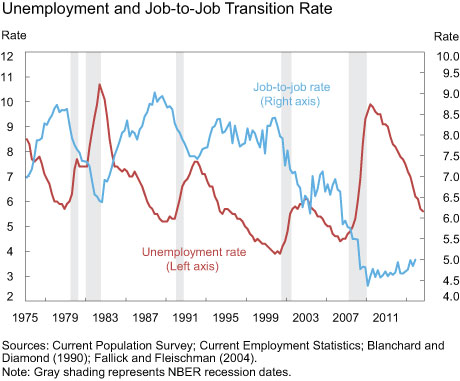 We use data from a special survey fielded in October 2013 as part of the New York Fed’s Survey of Consumer Expectations to shed some light on the implications of job-to-job transitions for wage growth and other job attributes. In particular, we look at current job outcomes of respondents in our survey, and are able to distinguish between workers who started their current jobs immediately after ending their previous jobs versus those who experienced a nonemployment spell between their previous and current jobs.

We find that—even when looking at similar workers—those who came into their current job through a job-to-job transition fare significantly better than those who experienced a period of nonemployment, along many dimensions.

The table below shows various (current and previous) job characteristics for these two groups of workers. We see both current and starting wages are significantly higher for those who arrived at their current jobs via job-to-job transitions than for those who experienced a spell of nonemployment. In fact, those who experienced nonemployment on average receive hourly wages similar to those on their previous job—signaling little or no wage growth. On the contrary, those who had a job-to-job transition experienced significant wage growth relative to the ending wage at their previous job. 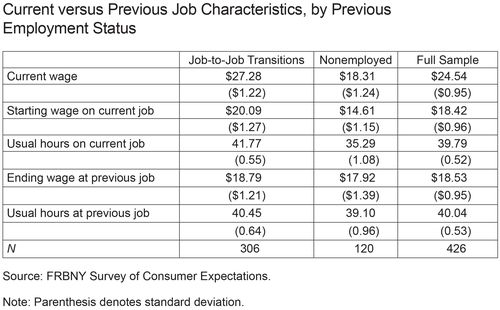 This finding holds even after conditioning on various demographic characteristics of these workers. As shown in the chart below, which plots the log ratio of current and previous wages conditional on various observables, differences in these characteristics are not responsible for the differential changes in wages among these two groups. Certainly, we cannot rule out the possibility that these workers are of different unobservable quality. However, the ending wage at their previous job is very similar across both types of workers, as we have seen in the above table, suggesting similar unobservable worker quality across these groups. (Hours at the previous job were similar, too.) 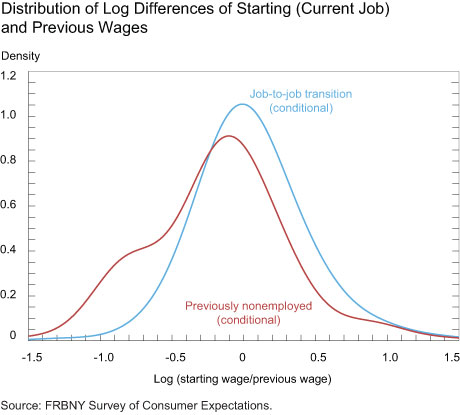 In addition, those who experienced a nonemployment spell between two jobs have significantly shorter tenure at their current job, as we see in the table below. To the extent that lower quality job matches are likely to be of shorter tenure than higher quality matches, this further suggests that workers who made job-to-job transitions enter higher quality employment relationships. Similarly, they are significantly more likely to receive benefits at their current job. So, not only are their wages higher, but other nonpecuniary attributes of the job are also better. 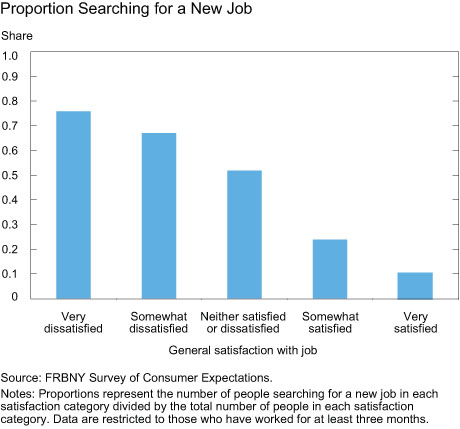 In sum, the survey evidence suggests that workers who do not experience a spell of nonemployment fare better than those who do in terms of job quality. They have higher wages, are more likely to be receiving benefits, and are more satisfied with their jobs as is evident from their search behavior. All these factors are consistent with the job ladder story which attributes wage growth largely to job-to-job transitions that move workers to better quality matches. These findings support the idea that perhaps we should explore the importance of job-to-job transitions—rather than movements in the unemployment rate alone—when thinking about the recent dynamics of wage growth.

Samuel Kapon is a former senior research analyst in the Bank’s Research and Statistics Group.

Laura Pilossoph is an economist in the Group.

Ayşegül Şahin is a vice president in the Group.

Giorgio Topa is a vice president in the Group.

Does this perhaps indicate that we’re watching the wrong measure of unemployment? One story that fits these data would say employers, when interviewing a presently employed candidate, reason that “we must offer him/her a better deal than what they’ve got now, or they won’t come here.” And they do. Starting salary $1.30 / hour above what the candidate was making on their old job, for example. But when interviewing someone who is currently unemployed, employers feel no such pressure. After all, the candidate’s current salary, at the time of the interview, is zero! They might view the old job — if only recently vacated — as a floor; “If we offer him/her much less than they were making, they likely won’t come here.” Even so, the observed starting wage is $3.31 below the ending wage at the previous job. And I’d wager that the longer the candidate has been unemployed, the less the employer feels pressured to match the old wage. Perhaps wages aren’t exhibiting the growth we might expect because, while some candidates are moving up, many others are moving down. And thus the average stays pretty much the same. (The spread should be widening.) And that downward suction would be coming from our currently high number of long-term unemployed. Perhaps a better forecast of wage pressure would come from looking at the size of the long term unemployed pool. (Full disclosure; the writer is not trained as an economist.)

Thanks for putting data around such an intuitive and familiar notion. The job-ladder story is surely important. It would be interesting to see the data with reference also to age and experience. I took a 30,000ft look at UK data from this angle here (https://principlesandinterest.wordpress.com/category/labour-market/) and was very surprised with the picture it revealed (and this was absent the richness of job ladder).