At the N.Y. Fed: The Transatlantic Economy: Convergence or Divergence? 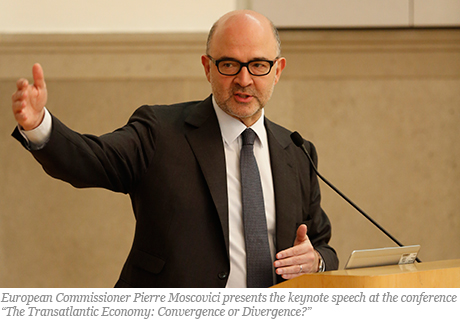 On April 18, 2016, the New York Fed hosted a conference on current and future policy directions for the linked economies of Europe and the United States. “The Transatlantic Economy: Convergence or Divergence?”—organized jointly with the Centre for Economic Policy Research and the European Commission—brought together U.S. and Europe-based policymakers, regulators, and academics to discuss a series of important issues: Are the economies of the euro area and the United States on a convergent or divergent path? Are financial regulatory reforms making the banking and financial structures more similar? Will this imply a convergence in macroprudential policies? Which instruments do the United States and the euro area have at their disposal to raise investment, spur productivity, and avoid secular stagnation? In this post, we summarize the principal themes and findings of the conference discussion.

The process of monetary policy normalization has started in the United States, while in the euro area the European Central Bank has lowered rates further into negative territory and introduced additional easing measures. On the other hand, a mildly expansionary fiscal policy stance is now common to the United States and the euro area. The financial reforms introduced in response to the financial crisis of 2008-09 have brought the financial systems on the two sides of the Atlantic closer, with the shared goal of making them safer and sounder. In addition, the aim of the capital market union is to make the European financial system less dependent on the banking sector and more reliant on direct sources of financing, as is already the case in the United States. Still, the two systems continue to be different in many respects and this may lead to a divergence in macroprudential policies. Finally, in the aftermath of the crisis, both the United States and the euro area have experienced a severe decline in investment spending as a share of GDP, rising inequality, and a further weakening in productivity growth, raising concerns about secular stagnation and jeopardizing the possibility of a more even distribution of growth.

The conference featured three sessions, detailed further in the agenda. The findings of each session are summarized below.

The recovery started earlier in the United States than in the euro area, and U.S. growth and employment creation have been stronger. As a result, the United States is in a different cyclical position than the euro area—a fact that explains the divergent monetary policy paths in the two economies. The weaker euro area recovery is related to persistent differences in economic activity, financial conditions, and fiscal sustainability across member states and the overall macroeconomic stance. In reality, these explanations are faces of the same coin, as (a) fragmentation undermines the monetary transmission mechanism, (b) country risk induces a contractionary bias in the fiscal stance (fiscal austerity), and (c) divergence feeds policy conflicts on adjustment, undermining cooperation when this is most needed.

To avoid a further widening of the divergence between the United States and the euro area in the future, the latter needs to become a mature economic union—an objective that will require completing the banking union to contain and manage contingent fiscal liabilities raised by banking fragility, including some form of risk sharing, safe assets, and a backstop of government debt.

Toward an Integrated Transatlantic Financial Market?

The European Union (EU) and the United States entered the crisis with different financial structures (bank-based in the case of Europe, more diversified in the case of the United States). In the United States, bank stabilization took place at an early stage of the crisis through the Troubled Asset Relief Program (TARP), followed by triage and recapitalization (the Supervisory Capital Assessment Program, or SCAP). Legislative reform of the financial sector was introduced and approved in 2010. In the EU, disincentives to proactive approaches led to country-based firefighting, and a coherent structural response only started in 2012 with moves toward a banking union. As a result, the U.S. financial system was able to provide support to the recovery at a much earlier stage than was possible in the European Union.

With the introduction of the banking union in the EU, structural convergence has started to take shape in terms of (i) capital and leverage ratios, (ii) stress testing, (iii) resolution frameworks, and (iv) supervisory and resolution institutions. These developments have been facilitated by the evolution of financial system structures in the two economies. In the United States, large nonbank broker-dealers have disappeared, while in the EU there has been an erosion of national idiosyncrasies, the tentative rise of large independent asset managers, and the introduction of a capital market union that aims to reduce the role of banks in the financing of economic activity. However, while there is undeniably some convergence, the financial systems of the EU and the United States will continue to display significant differences.

There are different narratives behind the secular stagnation hypothesis. Some of them emphasize demand factors (for example, asymmetric adjustment between debtors and creditors, the collapse of investment spending as a share of GDP, the rise in income inequalities, and cyclical hysteresis), while others underscore the role of supply factors (for example, the absence of radical innovation and the decline in labor and capital inputs). At the conference, particular attention was devoted to the strong decline in the investment-to-GDP ratio and to cyclical hysteresis.

Various factors can explain the decline in the investment ratio. Certainly the breakdown of financial intermediation during the crisis weakened investment spending. In addition, the weakness of demand kept investment spending subdued in the recovery phase (accelerator model). A third factor at play could be the presence of a toxic mix of low competition (in the post-crisis period the entry and the expansion of new firms have been very weak) and strong shareholder value pressure that hinders investment spending even in the presence of a high operating surplus and a strong market valuation (Tobin’s Q). As a result, share buybacks have been elevated at the expense of investment in physical capital.

As the International Monetary Fund suggested during the spring meetings, the policy response to these developments requires a multi-pronged strategy, with reforms aimed at providing more competition in the product market and at reducing both inequality and shareholders’ power, supported by monetary and fiscal policies. In this respect, monetary policy, with quantitative easing and, more recently, negative interest rates in a number of countries, has provided welcome help. This holistic approach should not rely only on monetary policy and structural reform, but should also assign a more active role to fiscal and income distribution policies.

The issue of whether the United States and the euro area are on a convergent or a divergent path remains an open question. Much will depend on the policy actions that will be taken in the coming years, as well as the modalities and timing of the completion of the Economic and Monetary Union. As Pierre Moscovici, European Commissioner for Economic and Financial Affairs, Taxation, and Customs, pointed out in his keynote speech at the conference, “we acknowledge the dangers posed by a prolonged period of low growth. Without greater reform efforts composed of demand- and supply-side policies . . . we risk experiencing subdued growth for the next decade. This is a scenario that we cannot allow to become reality.”

The views summarized in this this post do not represent those of the European Commission, the Centre for Economic Policy Research, the Federal Reserve Bank of New York, or the Federal System. Any errors or omissions are the responsibility of the authors.

Moreno Bertoldi is Special Advisor, Delegation of the European Union to the United States.

Valérie Rouxel-Laxton is Head of Economic and Financial Affairs, Delegation of the European Union to the United States.