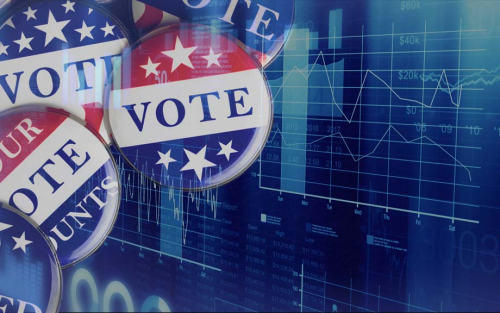 U.S. Treasury securities trade 22-23 hours per day during the trading week, as discussed in this Economic Policy Review article. The trading day for Wednesday, November 9, 2016 thus started at about 6:30 p.m. eastern time on Tuesday, November 8 (when it was already Wednesday morning in Asia), and continued until about 5:30 p.m. on November 9. This round-the-clock trading enables the market to immediately react to overnight news, such as election results. That said, the market is typically much less active during the overnight hours. 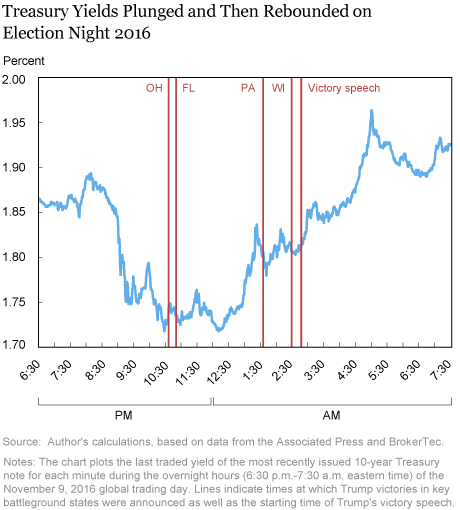 Although the yield declines preceded the announcements of Trump victories in key battleground states, they occurred as expectations of a Trump victory were rising sharply. The New York Times’ Upshot model, for example, put the probability of a Trump win at 18 percent at 8 p.m., 30 percent at 9 p.m., 63 percent at 10 p.m., and 95 percent at 11 p.m. Market commentary pointed to uncertainty about the eventual winner and uncertainty about Trump’s economic positions as explanations for the plunging equity market futures and Treasury yields.

Shortly after reaching its intraday low, the 10‑year yield surged higher, eventually reaching an overnight peak of 1.96 percent at 5:00 a.m. The yield then retreated somewhat, but surged again through the remainder of the morning, reaching a daily high of 2.08 percent at 1:23 p.m., and ending the day at 2.06 percent. The yield rebound came as remaining uncertainty about the winner of the presidential election was resolved, with a Trump victory speech that was seen as more conciliatory than expected, and with heightened expectations of expansionary fiscal policy in the new administration.

The Treasury market was active and liquid on election night. Overnight trading volume in the 10-year note on the BrokerTec trading platform (described in this New York Fed staff report) totaled $56 billion. This was the highest overnight volume in the note since BrokerTec’s inception in June 2000. The volume was also roughly 8½ times larger than the average overnight volume of $6.5 billion for the January 4 to November 8, 2016 period.

Bid-ask spreads on the BrokerTec platform remained narrow throughout the overnight period as well. The average spread between the best bid and offer prices for the 10-year note during the overnight hours was 0.60 32nds of a point (a point equals one percent of par). This was not much higher than the note’s minimum price increment and spread of ½ 32nd, and comparable to the average overnight spread of 0.56 32nds for the January 4 to November 8, 2016 period.

Limit-order book depth on the BrokerTec platform, in contrast, was somewhat lower than usual, averaging $162 million for the 10-year note during the overnight hours (calculated as the sum of bid and offer depths at the five best bid and offer prices). This compares with average overnight depth of $319 million for the January 4 to November 8, 2016 period.

What role did trading activity play in the path of yields on election night? Yield changes can occur without trading when public information arrives, as shown in this Journal of Finance article (released earlier as a New York Fed staff report). But information is also revealed through the trading process. Trades initiated by buyers tend to cause prices to rise (that is, yields to fall) and those initiated by sellers tend to cause prices to fall (yields to rise).

I then create a hypothetical yield path on election night by assuming that the 10-year yield was driven by the observed order flow in the 2-, 5- and 10-year notes alone, and to the extent predicted by the model. As shown in the next chart, the predicted yield path almost exactly matches the actual yield path. That is, election night yield changes are well explained by Treasury market order flow. Developments in other markets and public information (defined as information that moves prices without trading) seemingly played minor roles in directly causing the yield changes. 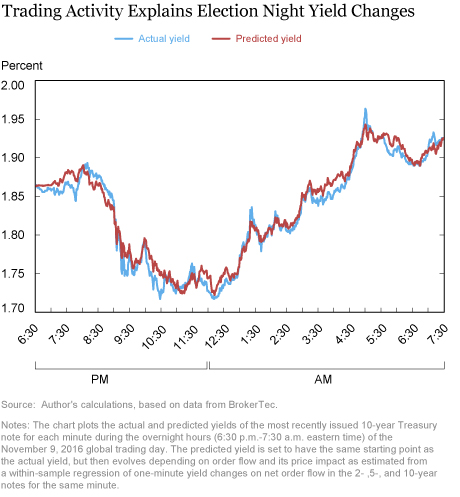 While this analysis does not try to ascertain why market sentiment shifted so suddenly on election night, I can draw two conclusions. First, the fact that the Treasury yield changes occurred amid good market liquidity suggests that the yields reflected a broad range of market participants’ expectations that night, as opposed to being driven by few orders amid poor liquidity. Second, the fact that the yield changes are largely explained by net order flow suggests that much of the price discovery was occurring via trading in the market, as opposed to Treasury yields simply responding to developments elsewhere.