Since the Financial Crisis, Aggregate Payments Have Co-moved with Aggregate Reserves. Why? -Liberty Street Economics

Since the Financial Crisis, Aggregate Payments Have Co-moved with Aggregate Reserves. Why? 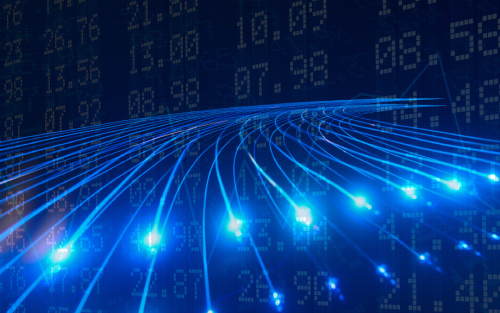 Fedwire Funds, a key payment system in the United States, is used by banks to wire money to one another throughout the day. Historically, the total value of payments sent over Fedwire has been roughly proportional to economic activity. Since the financial crisis, however, we have instead observed a strong co-movement between total payments and the level of aggregate reserves. This co-movement suggests that a fraction of every dollar of reserves created recirculates on a daily basis. In this post, we investigate why total payments, a flow variable driven by real and financial activity, would co-move with total reserves, a stock variable controlled by the Federal Reserve.

The chart below illustrates the relationship between nominal GDP, total reserve balances at the Fed, and the value of payments sent over Fedwire. Before the 2008 crisis, the aggregate value of Fedwire payments grew roughly in line with GDP, consistent with the intuitive notion that total payments co-move with overall economic activity. But since the crisis, as reserves have significantly increased as a result of the Federal Reserve’s large-scale asset purchases, total payments have been co-moving with the total stock of reserves. This co-movement suggests a type of activity involving large payments that is proportional to the level of reserves. To understand this activity, we study the parties involved in the payments that underlie the co-movement. What Drives the Co-movement between Payments and Reserves?
The expansion of the Federal Reserve’s balance sheet through crisis intervention and post-crisis asset purchases coincides with the introduction of interest on reserves (IOR) in 2008. All depository institutions with accounts at the Federal Reserve receive interest on their account holdings. However, since there are many financial market participants who do not have access to interest on reserves, several money market interest rates, including the federal funds rate, have remained below IOR for most of the period since 2008. This provides an opportunity for banks to borrow from other financial market participants at a rate below IOR, hold the funds as reserves, and earn the interest rate difference. Each of these loans leads to two payments on Fedwire—the transfer of the initial loan amount to the bank and, later, the repayment from the bank. Further, the aggregate scope of this “IOR arbitrage” activity (which is not limited to the fed funds market) is proportional to the aggregate level of reserves. IOR arbitrage activity is therefore a prime candidate for driving the co-movement between payments and reserves. 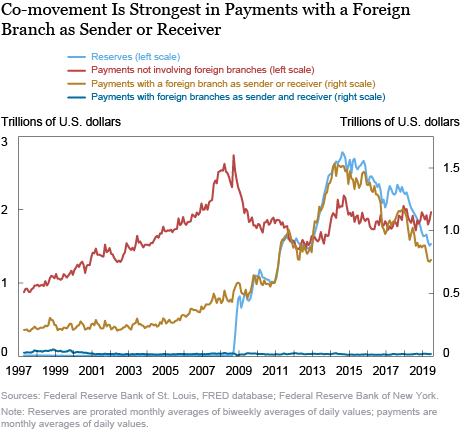 Who Is Sending the Payments?
If foreign branches are one of the main parties in borrowing activity driving the co-movement, what entities compose the other parties? Previous studies have found that, in the post-2008 period, the vast majority of lenders in the federal funds market have been government-sponsored enterprises (GSEs), such as Federal Home Loan Banks. GSEs have accounts at the Federal Reserve but are not eligible for IOR and therefore have a strong incentive to lend their excess funds to someone else if they can earn a positive interest rate. However, the next chart shows that reserves co-move with payments sent by non-GSE banks, rather than with payments sent by GSEs. Moreover, there is no immediate link between the reserves GSEs have available to lend and the aggregate level of reserves determined by the Federal Reserve, mainly through asset purchases. We therefore have to look outside of the federal funds market, to nonbanks, as the potential lenders in the IOR arbitrage loans. 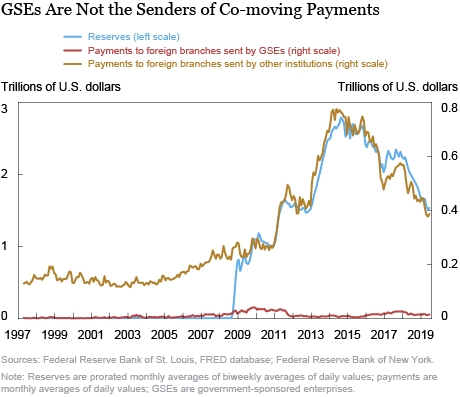 The increase in aggregate reserves since 2008 stems from the Federal Reserve’s purchases of Treasury securities and mortgage-backed securities (MBS) from both banks and nonbanks. Previous posts explain this mechanism for Treasuries and MBS: in a purchase from a bank, the Fed credits the bank’s Fed account with reserves, while in the case of a purchase from a nonbank, such as a money market fund, the Fed credits the Fed account of the nonbank’s custodian bank. Carpenter et al. (2014) show that most of the securities purchased after the crisis came from nonbanks. In the first round of asset purchases from 2008 to 2010, the Fed purchased $300 billion in Treasury securities, of which an estimated 70 percent came from nonbanks. The Fed also purchased $1.25 trillion in MBS, of which more than 60 percent came from nonbanks. In the second round of purchases from 2010 to 2011, the Fed bought $600 billion in Treasury securities, with an estimated 70 percent again coming from nonbanks. From the point of view of a nonbank, these transactions exchange a Treasury or MBS security for a deposit at the nonbank’s custodian bank. This deposit, equivalent to a loan, likely pays low or no interest, incentivizing the nonbank to invest the funds elsewhere. 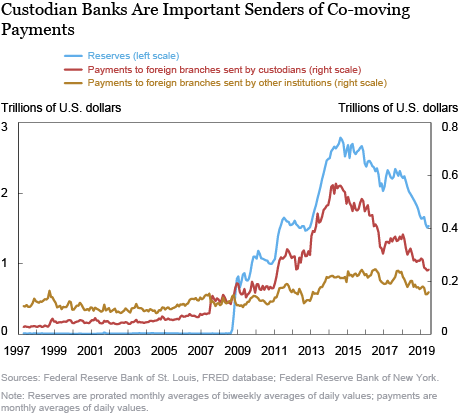 Summing Up
Underlying the striking co-movement between total payments and total reserves in the post-crisis period are payments from custodian banks to U.S. branches of foreign banks (and back). Combined with the evidence of Carpenter et al. (2014) that most of the large-scale asset purchases came from nonbanks, our result is consistent with nonbanks substituting their previous securities holdings in part with lending to foreign branches. Surprisingly, the payments required in these lending transactions are large enough to significantly affect aggregate payments in the economy.

Since the Federal Reserve began reducing the size of its balance sheet, the federal funds rate and other money market rates have risen closer to IOR and, in the recent past, surpassed IOR. Because this increase of other interest rates reduces or eliminates the potential for IOR arbitrage, we expect the co-movement between total payments and total reserves to weaken in the future.

Thomas Eisenbach is a senior economist in the Federal Reserve Bank of New York’s Research and Statistics Group.


Kyra Frye was a summer analyst in the Bank’s Research and Statistics Group.

Helene Hall is a senior research analyst in the Bank’s Research and Statistics Group.

Posted by Blog Author at 07:00:00 AM in Financial Institutions, Financial Markets