How Did Quantitative Easing Interact with Regional Inequality?

Income, or wealth, inequality is not something that central bankers generally worry about when setting monetary policy, the goals of which are to maintain price stability and promote full employment. Nevertheless, it is important to understand whether and how monetary policy affects inequality, and this topic has recently generated quite a bit of discussion and academic research, with some arguing that the Federal Reserve’s expansionary policy of recent years has exacerbated inequality (see, for instance, here or here), while others reach the opposite conclusion (see here or here). This disagreement can be attributed in part to the different channels through which expansionary monetary policy can affect inequality: its effect on asset prices would tend to increase inequality, while its effect on labor incomes and employment would likely decrease inequality. In this post, I study one particular channel through which Fed policies may have disparate effects—namely, mortgage refinancing—and I focus on dispersion across locations in the United States.

In a recent Staff Report with Martin Beraja, Erik Hurst, and Joseph Vavra (prepared for a symposium on monetary policy and inequality at the Brookings Institution’s Hutchins Center on Fiscal and Monetary Policy), my coauthors and I study dispersion in economic conditions across metropolitan statistical areas (MSAs) in the United States and how this dispersion interacted with unconventional monetary policy—especially the way monetary policy was transmitted through the mortgage market. We focus on the first round of “large-scale asset purchases” (colloquially known as “QE1”) that was announced in late November 2008 with the goal of supporting the housing market and financial markets more generally. The announcement of the program had a substantial effect on mortgage rates, which fell by almost one percentage point within a month of the announcement. Aggregate mortgage-origination activity—primarily refinancings—also reacted strongly, with applications leading to originations increasing by almost $100 billion in December 2008, or almost threefold relative to the months before the announcement.

Since refinancing into a lower-rate mortgage increases the borrower’s disposable income, and since refinancing also frequently involves some “cash out” of home equity, it is plausible that the refinancing wave in 2009 had a stimulative effect on the overall economy. (When mortgages are refinanced, the holders of the previous mortgage lose, but there are reasons why this would likely not offset the effect on borrowers, as discussed in this 2012 blog post).

We show in the paper, however, that the increase in refinancing activity was much stronger in some areas of the country than in others. Specifically, since it is more difficult or expensive for borrowers with little home equity to refinance, areas where home prices declined the most had relatively fewer homeowners who were able to refinance and benefit from the lower rates. Furthermore, as shown in the chart below, the locations where, in late 2008, many borrowers had combined loan-to-value ratios (CLTVs) above 80 percent—a threshold above which it becomes more difficult to refinance—were the same locations that had suffered large increases in unemployment over the previous two years. The upper-right area of the chart includes many MSAs from the “sand states”—Arizona, California, Florida, and Nevada—which were hit hardest by the housing bust. 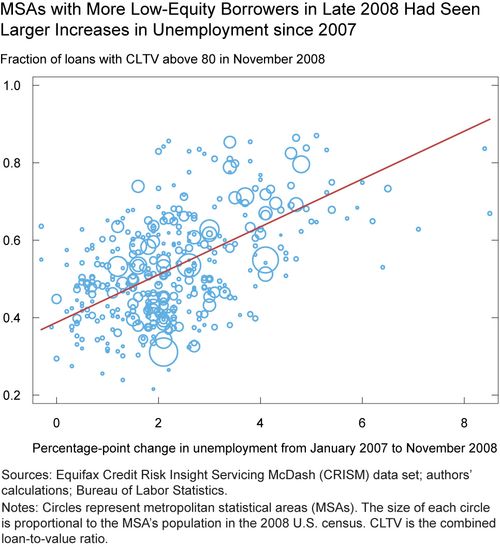 In the chart below, we plot the amount of refinancing originations (by month in which the loan application was filed) for the 25 percent of MSAs with the lowest fraction of borrowers with CLTV ratios above 80 percent, and the 25 percent of MSAs with the highest fraction of high-CLTV borrowers. What the chart shows is that refinancing volumes increased in both groups but the increase was much greater in the MSAs where borrowers had more equity. 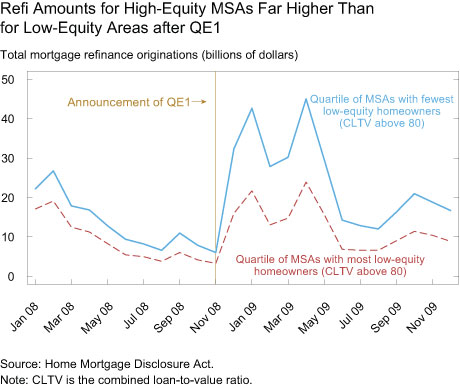 In our staff report, we show that this is not just true for refinancing overall but also when looking at “cash-out” refinances, where borrowers extract equity from their homes when refinancing their mortgages. We estimate that over the first half of 2009, borrowers in the quartile of low-CLTV MSAs extracted $16 billion of equity, compared with just $6 billion in the quartile with high-CLTV borrowers. (This may have added to the broader trend of stronger debt growth in relatively higher-income areas, as discussed in an earlier post in this series.)

We also present evidence that this differential reaction to monetary policy was reflected in consumer spending. In particular, we look at a measure of new car sales and find that those sales increased differentially more in the low-CLTV MSAs relative to the high-CLTV MSAs following the announcement of QE1, as the following chart illustrates. 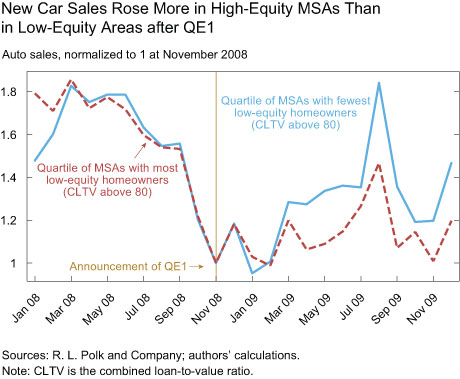 These findings suggest that, at least in terms of how it was transmitted through the mortgage market, recent unconventional monetary policy had less of a beneficial effect for the areas of the country that were doing relatively poorly at the time the policy was announced.

However, is this outcome an argument against using such policies? Not necessarily. In fact, to hit its aggregate objectives, the central bank may need to use more aggressive expansionary policy when many borrowers are unable to take advantage of the low rates and when those who can take advantage have a lower propensity to consume if their debt burden decreases—the point being that the dispersion in characteristics (such as CLTV and unemployment, in our example) affects the transmission of monetary policy.

What this episode also highlights is the importance of frictions in the transmission of monetary policy through the mortgage market (a topic that was discussed during a recent conference held at the Federal Reserve Bank of New York). In the United States, where most mortgages have fixed rates, a borrower needs to qualify for a new loan in order to benefit from lower rates. If, instead, more borrowers had adjustable-rate loans, as in most other countries, they would have automatically benefited from a decrease in rates, and the increase in dispersion might not have occurred to the extent described above. (In fact, as we explain in the paper, the higher prevalence of adjustable-rate loans in the sand states did to some extent counteract the effects shown above, though only incompletely so.)

Another lesson is that fiscal policy measures can counteract a tendency for monetary policy to have more beneficial effects on areas or households that are in a better position to begin with, and can improve the overall efficacy of monetary policy. In the case of mortgage refinancing, the government introduced the Home Affordable Refinance Program in 2009 (and then enhanced it in 2012) in order to allow more borrowers to benefit from low rates, even if the borrowers were underwater on their mortgages. To date, more than three million people have taken advantage of the program, which likely reduced their default risk and also had some stimulative effect on the economy.