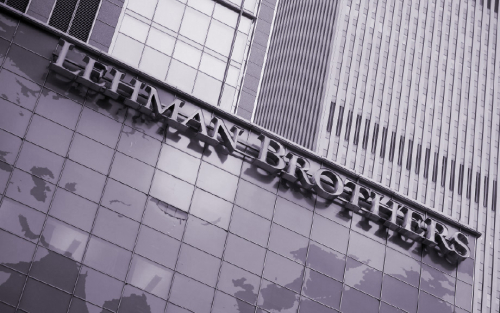 In our second post on the Lehman bankruptcy, we discussed the cost to Lehman’s creditors from having their funds tied up in bankruptcy proceedings. In this post, we focus on losses to Lehman’s customers and employees from the destruction of firm-specific assets that could not be deployed as productively with other firms. Our conclusions are based in part on what happened after bankruptcy—whether, for example, customer accounts moved to other firms or employees found jobs elsewhere. While these costs are difficult to pin down, the analysis suggests that the most notable losses were borne by mutual funds that relied on Lehman’s specialized brokerage advice and firms that employed Lehman for its equity underwriting services.

Lehman’s bankruptcy caused minimal disruptions to most customers of its broker dealer, Lehman Brothers Inc. (LBI). One reason is that, by law, customer assets and Lehman’s own assets were segregated. Also, perhaps because the bankruptcy was to some extent foreseen, a large number of customer accounts transferred out before LBI’s default. The table below shows that free credit balances (which are similar to bank deposits) in LBI customer accounts declined more than 60 percent in dollar terms between May 2008 and September 19, 2008 (the date that LBI filed for bankruptcy). The number of items (a proxy for the number of accounts) declined over 20 percent. Customers with large balances exceeding $1 million were even more aggressive, as the number of such accounts declined roughly 40 percent between May 2008 and September 19, 2008. Hedge fund customers migrated their accounts particularly early. Their free credit balances fell by about $3 billion between mid-March 2008 and May 2008, declined a further $2 billion between May and August 2008, and accelerated in September 2008. 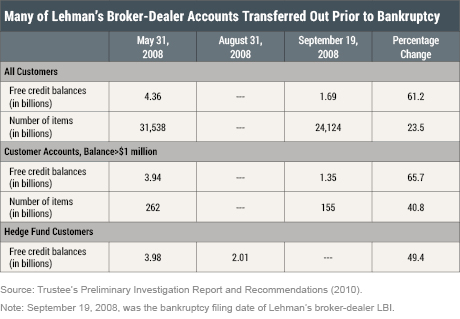 In contrast to these mostly retail customer accounts, LBI’s institutional customers—in particular, its prime broker accounts—faced delays in resolving their claims. Lehman was a prime broker providing financing and custodial services to hedge funds. Barclays unexpectedly refused to accept these accounts from LBI, and it ended up taking about five years to resolve these claims. While prime broker customers were ultimately made whole, there is some evidence that they incurred opportunity costs. A recent study finds evidence that Lehman’s failure inhibited some hedge funds from trading, possibly because their assets were trapped in bankruptcy. As a result, some of these funds failed.

Hedge fund customers of Lehman’s U.K.-based broker-dealer Lehman Brothers International (Europe) (LBIE) faced more severe problems. Many of them attempted but failed to move their accounts to new prime brokers when LBIE entered into administration in the United Kingdom. Subsequently, some hedge funds could not locate their collateral since LBIE had lent it out to others or used it to borrow funds. In spite of these issues, the effect on the hedge fund industry overall was likely contained, as hedge funds using Lehman as their broker accounted for less than 1 percent of total industry assets.

Sixty percent of U.S. mutual funds also availed of Lehman’s prime brokerage services. Although many of these accounts were transferred to Barclays, another study argues that some mutual funds had poor performance in the year after Lehman’s collapse, in part due to the loss of critical Lehman employees. These mutual funds tended to rely on a small number of brokers (and so had fewer choices) and invested in illiquid small cap stocks for which brokerage services are more valuable.

Lehman also acted as a broker in securities and derivatives trading markets in which a central counterparty (CCP) intermediated and guaranteed the customer’s trades. Customer positions in these centrally cleared securities were resolved quickly and with minimal losses because, following Lehman’s bankruptcy announcement, CCPs quickly transferred client accounts to other solvent clearing firms. Clients thereby obtained access to their accounts within days of Lehman’s bankruptcy filing. The success of CCPs in protecting customers during Lehman’s failure spurred greater use of central clearing in securities markets after the financial crisis.

Before its bankruptcy, Lehman was one of the top three underwriters in the United States. Firms utilized Lehman for underwriting their bond and equity issuance, for facilitating mergers and acquisitions, and for making markets in their securities. As investment banks produce valuable information about their clients through due diligence, switching may be costly for such clients. Thus Lehman’s failure may have harmed these clients, particularly in activities where information production is more important, such as equity underwriting.

Indeed, two studies find large declines in the stock prices of Lehman’s equity underwriting clients in the days around its bankruptcy (see the table below). One of the studies estimates losses of about $23 billion. These losses had real effects, as the firms subsequently reduced securities issuance and investment spending. In contrast to equity underwriting clients, other types of underwriting clients, as well as mergers and acquisitions clients and firms receiving analyst coverage, did not face substantive losses—presumably because information production by investment banks is not as valuable in these activities. 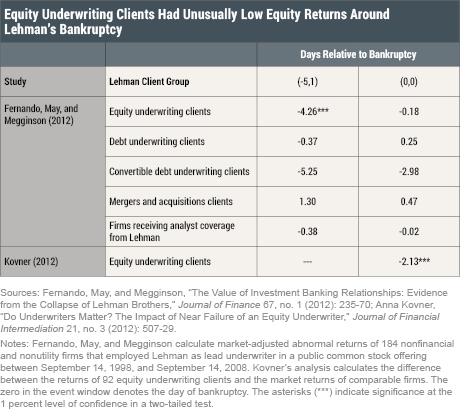 Research shows that employees of bankrupt firms suffer significant wage losses, up to 30 percent of annual pre-bankruptcy wages two years after bankruptcy. This decline is attributed to the loss of firm- or industry-specific skills or poor matches between workers and firms. If the employee finds a job in the same profession, this outcome likely indicates that his or her skills are transferable to other firms. Thus, CEOs who leave the executive market following bankruptcy suffer significant wage losses while those who remain executives maintain their wage levels.

When Lehman Brothers filed for bankruptcy, some 25,000 people were left searching for work. Most employees of Lehman’s broker-dealer found jobs at other banks. After Japanese broker Nomura Holdings bought Lehman’s operations in Asia, Europe, and the Middle East in September 2008, about 8,000 Lehman staff joined Nomura. Barclays assimilated many Lehman employees after taking over some of its assets. These developments suggest that Lehman bankers’ skills were transferable to other firms.

However, the skill transfer was not smooth. Many Lehman employees left Nomura owing to a lack of cultural fit (but were then hired by other firms). About one-third of Lehman employees were immediately laid off by Barclays, with another third leaving in the subsequent years. Even employees who found a new position may have been less productive as a result of the loss of team-specific human capital, contributing to lower wages. As of 2009, the chief economist at the New York City Comptroller’s office estimated that about 2,000 ex-Lehman employees had left the financial industry. That said, whether the difficulty that these employees had in finding financial jobs is attributable to Lehman’s bankruptcy is hard to pin down, since the broader financial industry in New York lost jobs during the financial crisis.