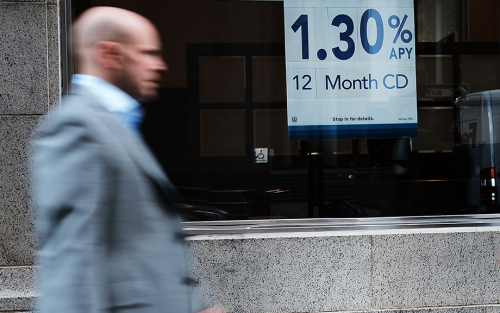 The chart below shows the time series of three-month CD rates, MMF net yields, and the effective federal funds rate. Although both CD rates and MMF yields track the federal funds rate, their response to monetary policy changes is starkly different and has become even more so during the last tightening cycle. 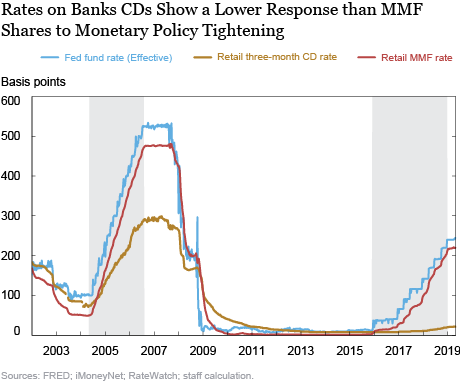 The Expansion of the MMF Industry during Monetary Policy Tightening

Given the lower responsiveness of bank CDs to monetary policy tightening, one could expect that, during a tightening cycle, money flows from CDs to MMFs. 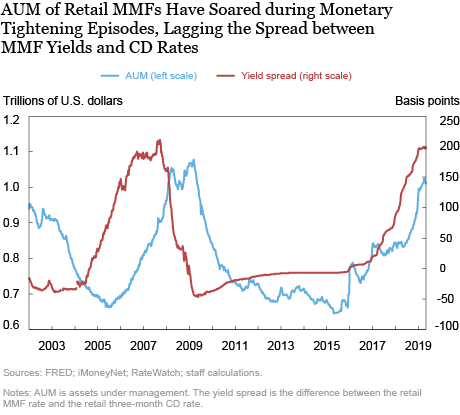 Is the Lower Beta on Deposits due to the 2014 MMF Reform?

A possible explanation for the lower elasticity of bank CD rates during the last tightening cycle is the effect of the 2014 MMF reform by the Securities and Exchange Commission, which went into effect in October 2016. By stripping prime MMFs of some of their liquidity features, the reform has made such investment vehicles a less attractive option for cash investors.

The elasticity of bank CD rates to monetary policy tightening is much lower than that of MMF shares and has become ever lower after the financial crisis. The weaker elasticity of CD rates relative to MMF shares is accompanied by an expansion of the size of the MMF industry during tightening cycles. Such expansion was more pronounced for the last tightening cycle than during the previous one. This evidence casts doubt on the view that the MMF reform is a reason why the beta on CD rates has become so negligible.

Jeff Gortmaker is a former senior research analyst in the Bank’s Research and Statistics Group.

“The weaker elasticity of CD rates relative to MMF shares” is a good thing. Otherwise money velocity would decline even further. Banks don’t loan out deposits. Banks create deposits when they lend/invest. So all bank-held savings are un-used and un-spent, lost to both consumption and investment, indeed to any type of payment or expenditure. The only way to activate these funds is for their owners to invest/spend either directly or indirectly outside of the payment’s System. Savers never transfer their savings outside of the payment’s System (where all monetary savings originate) unless they hoard currency, or convert to other National currencies. The principle ways in which to reduce the volume of bank deposits is for the saver-holder to use his funds for the payment of a bank loan, interest on a bank loan for the payment of a banks service, or for the purchase from their banks of any type of commercial bank security obligation, e.g., bank stocks, debentures, etc. This is the sole source of secular strangulation since 1981 (the apex in the monetization of time deposits – the near end of gate-keeping restrictions), not robotics, not demographics, not globalization. See the GOSPEL: “Should Commercial Banks Accept Savings Deposits?” Conference on Savings and Residential Financing 1961 Proceedings, United States Savings and loan league, Chicago, 1961, 42, 43.

Perhaps people assign a higher value post-crisis to the “embedded option” in CDs (i.e. FDIC insurance) which does not exist in MMFs. This could explain, in part, why CD rates have not increased commensurately. Thoughts?

Hi. Thanks for the interesting post. Wouldn’t it make sense to rebase the AUM to say US Nominal GDP? Given the economy has grown from say $15tn in 2008 to $21tn now, this makes quite a difference. The impact of US Treasury issuance and stocks market cap could also be impacting a lot. Regards

Thanks for posting this piece. It’s very interesting. I have 2 questions: 1). Any explanation for why the deposit beta is so low? 2). Why do you think banks can keep the deposit beta so low without losing customers and deposits?