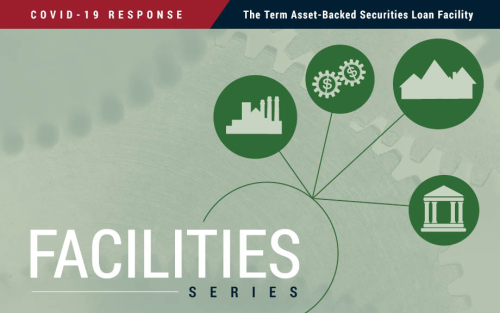 The asset-backed securities (ABS) market, by supporting loans to households and businesses such as credit card and student loans, is essential to the flow of credit in the economy. The COVID-19 pandemic disrupted this market, resulting in higher interest rate spreads on ABS and halting the issuance of most ABS asset classes. On March 23, 2020, the Fed established the Term Asset-Backed Securities Loan Facility (TALF) to facilitate the issuance of ABS backed by a variety of loan types including student loans, credit card loans, and loans guaranteed by the Small Business Administration (SBA), thereby re-enabling the flow of credit to households and businesses of all sizes. In this post, we describe how the TALF works, its impact on market conditions, and how it differs from the TALF that the Fed established in 2009.

Conditions in Securitization Markets around the Pandemic Crisis

When financial firms provide loans to borrowers, they may keep these loans on their balance sheets until they are repaid, or they may securitize them. In a securitization, large numbers of these loans are pooled and used as collateral for issuing securities backed by the principal and interest payments on the loans (see chart below). Further, the cash flows from the loan pools are divided into multiple tranches with different risk characteristics and ratings, allowing investors such as pension funds, insurance companies, or mutual funds to buy the tranches that meet their capacity to bear risk. For example, risk-averse investors may choose to buy only the AAA-rated tranche of a securitization. Financial firms typically sell the loans to a separate, bankruptcy-remote entity that holds the loans and issues securitized debt, freeing up their capacity to make new loans.

The importance of securitization as a funding source is evident in the large volume of ABS issued in 2019, when more than $300 billion in ABS were brought to market. After a seasonal lull in December 2019, ABS issuance was on the upswing in January and February of 2020 (see chart below). However, as coronavirus cases surged and authorities imposed shutdowns beginning in March 2020, the economic outlook became highly uncertain, disrupting financial markets. Total ABS issuance declined more than 70 percent from February to April 2020. 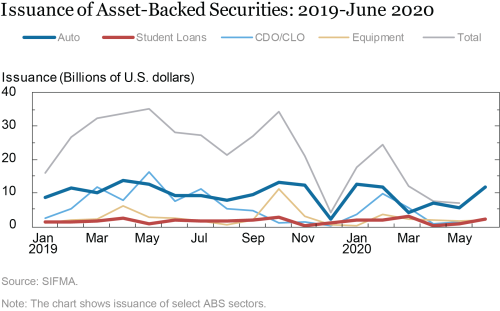 Since the ABS market has historically funded a significant portion of consumer and business lending, continued disruption of these markets—and financial markets more broadly—had the potential to strain the liquidity and balance sheet capacity of financial institutions and thereby limit their ability to make loans to consumers and businesses. 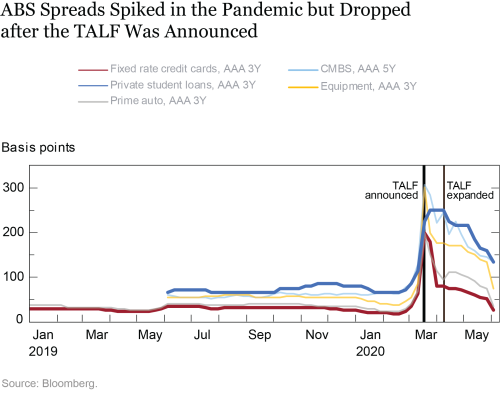 The Establishment of the TALF

To facilitate the issuance of ABS, stabilize ABS markets generally, and support the continued availability of credit to households and businesses, the Federal Reserve Board authorized the Federal Reserve Bank of New York to establish the TALF under the authority of Section 13(3) of the Federal Reserve Act, with the prior approval of the Secretary of the Treasury. The initial size of the facility is $100 billion, supported by $10 billion of equity authorized by the U.S. Department of the Treasury, using funds appropriated by Congress under the Coronavirus Aid, Relief, and Economic Security Act (the CARES Act).

What Does the TALF Do and How Does It Do It?

The TALF is designed to facilitate the issuance of ABS backed by newly and recently-originated consumer and small business loans, leveraged loans, and commercial mortgages. U.S. businesses, or investors, that own eligible collateral and maintain an account relationship with a designated TALF agent may borrow from the TALF. The New York Fed will lend to a special purpose vehicle (TALF II SPV), which will provide funding to eligible borrowers that own eligible ABS (see chart below). The TALF will lend an amount equal to the market value of the ABS, less a haircut to account for the credit risk of the collateral, and the loan will be secured at all times by the ABS. By offering TALF loans to investors to purchase ABS, the facility provides liquidity to securitization markets and thereby facilitates the issuance of new ABS. In turn, financial firms that sell ABS to investors will free up capacity to continue lending to households and businesses.

The TALF contains several features intended to protect taxpayers from losses under adverse economic conditions. For an ABS to be eligible for a TALF loan, it must have a AAA credit rating from at least two rating agencies. In addition, TALF borrowers must post a haircut, calculated as a percentage of the underlying value of the ABS, implying that the SPV does not take a loss unless the collateral depreciates by more than the haircut. The TALF will only accept underlying assets or ABS structural features that are relatively simple and safe so as to further reduce the risk of loss to the taxpayer. 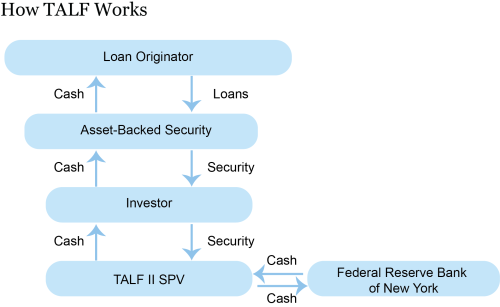 Approximately twice each month, borrowers are able to request one or more three-year TALF loans. TALF loans are non-recourse to the borrower—that is, if the borrower does not repay the loan, the TALF SPV will enforce its rights in the collateral—a feature that is atypical of market financing under normal conditions. To provide more support under stressed market conditions, the TALF makes loans at a premium over the rate that would prevail under normal market conditions. The TALF termination date is December 31, 2020, after which no new TALF loans will be made unless the TALF is extended by the Board of Governors of the Federal Reserve System and the Department of the Treasury.

The first two subscriptions occurred on June 17 and July 6. There were $937 million of TALF loans outstanding as of July 22, of which 50 percent was backed by SBA bonds and 38 percent by CMBS bonds.

How Did Markets Respond to the Announcement of the TALF?

The announcement of the TALF appears to have provided a backstop for securitization market activity and helped to normalize ABS spreads, as seen from the previous chart. For example, from the announcement of the TALF on March 23 to the week of April 9, spreads on AAA-rated, 5-year tranches of CMBS dropped from 307 basis points to 244 basis points, and AAA-rated, 3-year maturity tranches of primary auto loan ABS dropped from 200 basis points to 95 basis points. However, spreads on some less liquid ABS asset classes, such as subprime auto loans and student loans, remained elevated.

On April 9, the asset classes eligible for the TALF were expanded to include certain types of collateralized mortgage-backed securities (CMBS) and collateralized loan obligations (CLOs). Interest rate spreads on these new TALF-eligible asset classes had already tightened following the initial TALF announcement, and tightened further following announcement of the expansion. Interestingly, interest rate spreads on ABS asset classes that had not improved following the TALF announcement on March 23 also fell after the expansion of the TALF and announcement of new Fed actions on April 9. For example, spreads of AAA tranches of ABS backed by subprime auto loans dropped from 300 basis points in the week of April 9 to 165 basis points the following week.

In addition to spreads, issuance of ABS backed by TALF-eligible collateral such as auto loans and student loans has rebounded close to pre-pandemic levels. However, this is not true for overall ABS issuance, suggesting that some less liquid sectors continue to struggle.

In responding to the market dislocation emanating from the COVID-19 pandemic, the Fed created several liquidity and credit facilities. Some of these facilities, including the TALF, were used previously during the financial crisis of 2007-09. While the new TALF has some differences from the 2009 version, notably its inclusion of CLOs as eligible collateral, their structures are largely similar. The successful implementation of the TALF in 2009 provided a familiar template for the new TALF, improving market participants’ confidence even before the operational details of the new TALF had been worked out.

Elizabeth Caviness is an officer in the Federal Reserve Bank of New York’s Markets Group.