« Historical Echoes: The Woman Who Would Be Bank | Main | The Effect of the Strong Dollar on U.S. Growth » 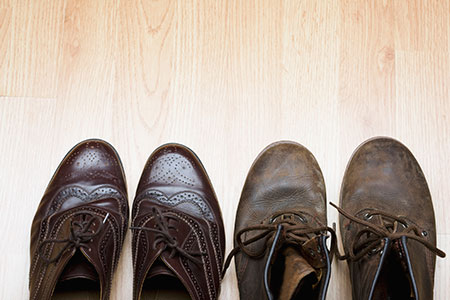 
My aim in the second post of this series on Thomas Piketty’s Capital in the Twenty-First Century is to talk about the economist’s research accomplishment in reconstructing capital-output ratios for developed countries from the Industrial Revolution to the present and using them to explain why wealth inequality will rise in developed countries. I will then provide a critical discussion of his interpretation of the history of capital in the developed world. Finally, I’ll end by discussing Piketty’s main policy proposal: the global tax on capital.


Capital and Output in Developed Economies
Piketty argues that if savings rates and growth rates do not change over the long run, the ratio of the capital stock to output should also tend to a constant long-run value. The core empirical observation in Capital is that the capital stock in developed economies is returning to its old long-run level of about six or seven times the size of annual output, after having been depressed for half a century at a level of three to four times annual output. We can see the evolution of the capital stock in several major European countries in the chart below. For most of the Industrial Revolution, these countries’ capital stock was between 600 percent and 700 percent of their GDP. During World Wars I and II, as well as during the Great Depression, large amounts of private capital were physically destroyed, depreciated, or lost value through inflation and regulation. Subsequently, the capital-output ratio remained low because of temporary rapid postwar growth of output, but also because of inflation and heavy regulation and taxation of capital, which decreased the rate of return to capital. However, its natural trend was to recover to its old steady state, which it did by the beginning of the twenty-first century, accompanied by developed-country governments lowering capital taxes and regulation, and getting inflation under control. 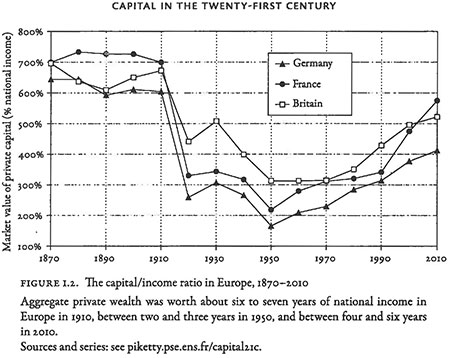 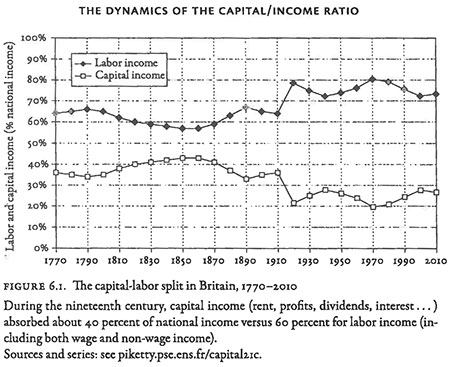 
Finally, Piketty presents evidence to show that wealth inequality in developed countries (again, with Britain as an example) has been moving together with the share of output going to capital. 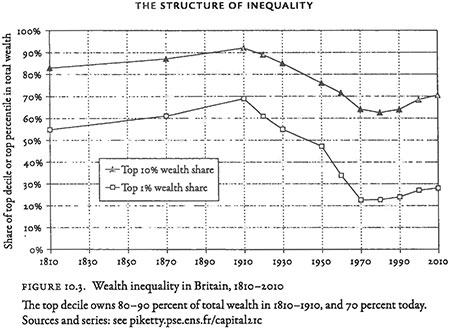 
Piketty calls his book “primarily. . . about the history of the distribution of income and wealth” and writes this history masterfully. He draws his statistics from tax, estate, and probate records, as well as the national accounts and wealth surveys of the largest developed economies of the industrial period, and accomplishes a tour de force in synthesizing different data sources to generate his series for these countries’ capital stocks. It is telling that when journalists from the Financial Times found fault with some of Piketty’s choices on exactly how to construct some of the data series, they found that their preferred methods of construction yielded very similar results.


Does capital deepening lead to inequality?
While Piketty is correct that the capital-output ratio will likely rise in the long run, and that capital and labor are highly substitutable, it is unlikely that the rise in the capital-output ratio should increase the share of output that ends up as capitalists’ net income. It is well-known that capital depreciates: machines break and buildings need repair and refurbishment after they have been used. Therefore, what the capitalist cares about is not just how much revenue she gets from operating a machine, but how much of that revenue is left over after restoring the machine to its initial condition (her net profit). Hence, while Piketty is right that the gross share of output going to capital is likely to continue increasing, the share of output that is the net profit of capital may well decrease. In fact, a recent Brookings Paper on Economic Activity argues that the increases in the capital-output ratio that Piketty envisions would even reduce the share of output that owners of capital would have left for consumption and investment after depreciated capital is replaced.


Piketty’s Policy Proposal
Piketty is dismayed by the prospect of a return to nineteenth-century wealth inequality. Among the problems he finds with it are:


To try to maintain the low level of inequality of the mid-twentieth century, Piketty proposes a global tax on capital. The aim of this tax would be to lower the rate of return on capital r that private individuals would receive. It would replicate the situation of fifty or so years ago, when after-tax r was lower than g, and owners of capital had a hard time maintaining and passing down their fortunes. Piketty argues that such a tax would have to be global to avoid individual countries not taxing so that they can attract investment from countries that do, which has been the main mechanism for the decline in capital taxation in the developed world.


What should we do?
Piketty identifies valid reasons to be worried about inequality. However, in contrast to his extremely well-researched history of inequality, he does not present a systematic view of the empirical evidence that can help society balance the benefits of equality with the costs of decreasing inequality through taxation. It is likely that meritocratic societies grow faster in the long run, but we do not know by how much. Neither do we know how substantial the distortions are from capital misallocation. It is likewise difficult to quantify the importance of money in politics. Piketty’s preferred policy—taxation of capital—also has costs because, like any other tax, it will discourage the taxed activity—saving, investment, the accumulation of capital, and eventually economic growth, at least in the long run. What the reader of Capital does not get is a quantitative assessment of which costs matter more. More targeted measures, such as improving financial and political institutions, could also deal with the costs of inequality in a more surgical way than a tax on capital, as highlighted by Acemoglu and Robinson (2015).

One policy prescription that Capital implies is that supporting economic growth should help keep inequality low. Higher rates of growth (if r remains steady) decrease the gap r – g and lower the steady-state capital-output ratio. So, an additional argument for policies aimed at improving the overall efficiency of the economy—such as reforming education, streamlining regulations, or investing in public goods—is that they decrease the influence of established fortunes, to the extent that such influence is bad.

Piketty has revitalized study of the distribution of income and restarted a conversation about the role of inequality in society. He has also identified potentially important mechanisms through which wealth inequality may rise in the future. However, it appears likely that Piketty overestimates by how much inequality may continue to increase, and how much of a problem it may be to society. In addition, his policy prescriptions do not marshal the same weight of evidence as does his positive analysis.

Related Post
A Discussion of Thomas Piketty’s Capital in the Twenty-First Century: By How Much Is r Greater than g?

Maxim L. Pinkovskiy is an economist in the Federal Reserve Bank of New York’s Research and Statistics Group.
Posted by Blog Author at 07:00:00 AM in Economic History, Housing, Inequality, Macroecon