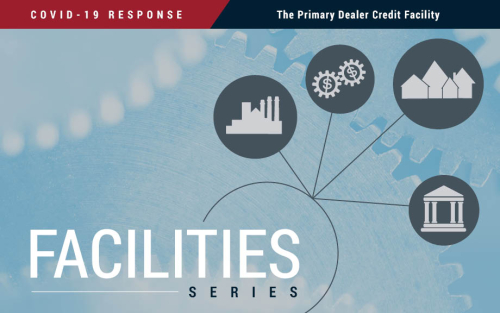 The coronavirus pandemic led to extreme uncertainty regarding the future path of the economy. This uncertainty, in turn, led to considerable market volatility for a wide range of assets, as investors tried to deleverage, reduce risk positions, and build up cash reserves. Michael Fleming and Francisco Ruela describe the impact of that volatility in the Treasury market in this Liberty Street Economics post. Markets for nongovernment securities were also affected, as selling pressures strained financial intermediaries’ ability to make markets for buyers and sellers of securities. By mid-March, market disruptions were so severe that the Federal Reserve determined that circumstances were “unusual and exigent” and established the PDCF, with the approval of the Treasury Secretary, under the authority provided in Section 13(3) of the Federal Reserve Act.

Funding extended to primary dealers under the PDCF may be collateralized by a broad range of investment grade debt securities, including commercial paper and municipal bonds, and a broad range of equity securities. PDCF loans are made with recourse to the firm’s assets in the event of a borrower default. This contrasts with some of the Fed’s non-recourse facilities, for which the Treasury Department is providing capital to absorb any initial losses experienced.

Lending rose quickly after the PDCF’s launch, and the weekly average of outstanding loans peaked at over $35 billion for the week ending April 15, as shown in the next chart. Outstanding loans remained in the $30-35 billion range for a few weeks, before decreasing recently, as market conditions improved. The vast majority of value-weighted PDCF loans have a maturity longer than overnight. 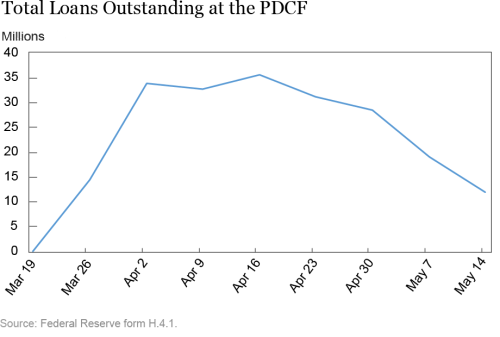 The bulk of the assets financed in the PDCF to date have been corporate and municipal debt, as well as asset-backed securities and commercial paper. These are asset classes that were experiencing considerable volatility and pressure in early March. Market conditions have improved markedly since the introduction of a variety of Fed interventions, including the PDCF (an overview of these interventions is available here). While it is difficult to measure the importance of each individual facility to improving market functioning, the interventions together appear to have had a beneficial effect. Both cash and funding market pressures in PDCF-eligible asset classes have diminished since the PDCF launched. The chart below represents spreads in the cash market. 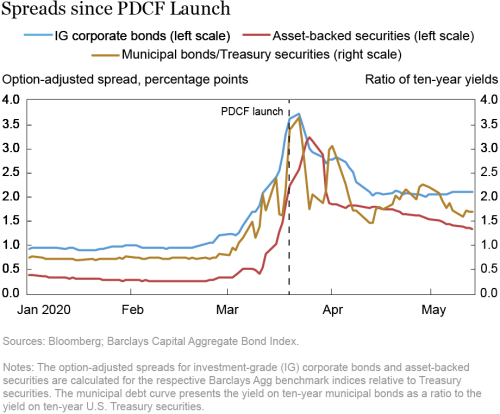 Comparison with the 2008 PDCF

The economic stress and the drivers of financial market disruptions were very different in March 2020 than they were in 2008. In 2008, the repo market stress that led to the creation of the PDCF appeared to be largely driven by concerns about some dealers’ exposure to subprime mortgages. In contrast, in the current environment, investors have pulled back from risk assets to build up cash positions, due to uncertainty about the economic effects of the coronavirus pandemic and how long they will last. In the current environment, the PDCF supports the ability of primary dealers to make markets, including in risk assets, thereby facilitating the availability of credit to businesses, households, and municipalities.

Following its inception in March 2008, usage of the original PDCF increased to approximately $40 billion, before decreasing to zero by mid-2008, as shown on the next chart. This $40 billion level is roughly comparable to the peak usage of today’s PDCF. 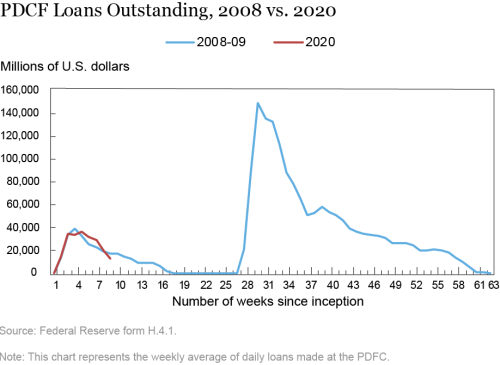 Usage of the original PDCF increased to over $140 billion in September 2008, following the bankruptcy of Lehman Brothers. This peak is much higher than the current use of today’s PDCF. However, the range of collateral eligible for the PDCF post-Lehman was much broader than the range of eligible collateral at the PDCF today, making comparisons difficult.

Note that the volume of privately issued securities financed in the tri-party repo market is markedly lower today than in 2008; approximately $340 billion in March 2020 compared to $600 billion in August 2008. (Tri-party data starting in May 2010 are available on the New York Fed’s website. Earlier data were made public with the Financial Stability Oversight Council’s 2011 annual report.) So, it’s interesting to observe that the level of PDCF borrowing is similar today to what it was in 2008.

An important difference between the PDCFs in 2008 and 2020 is that the current incarnation offers credit to primary dealers for up to ninety days, rather than only overnight, as was the case for its predecessor. Indeed, as noted above, the vast majority of the current borrowing at the PDCF has been at term. This suggests that today’s PDCF can do more to stabilize term markets.

The PDCF is one of many facilities introduced by the Federal Reserve to support the U.S. economy in the face of the coronavirus pandemic. The PDCF helps primary dealers support smooth market functioning and facilitate the availability of credit to businesses and households in their capacity as market makers for corporate, consumer, and municipal obligations.

The authors thank Steven Block, Justin Epstein, Pooja Gupta, Helene Hall, and Tim Wessel for their assistance with the data underlying the charts.