« What Can We Learn from Prior Periods of Low Volatility? | Main | Historical Echoes: “Burns Money” on What’s My Line? » The offsetting trends in labor force participation rates have helped minimized differences in per capita growth between the two countries since 2000. Over time, a country’s growth is dictated by the quantity and quality of its labor and capital, along with it success in improving how workers and capital are used (total factor productivity). The moderation of differences in the labor force given the wildly different demographic trends has contributed to a very small gap in per capita GDP growth since 2000 for the two countries, as seen in the chart below. The 1990s was a decade of weak growth in Japan relative to that in the United States, but Japanese GDP adjusted for population growth has closely tracked that of the United States since then even as the U.S. economy grew more than twice as fast (25 percent versus 10 percent). 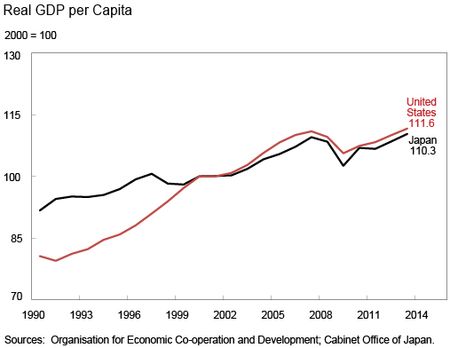 The challenge for Japan is to sustain growth while the population continues to age. The United Nations (UN) estimates that the pace of the decline in Japan’s working-age population is easing, but will still fall at an average rate of 0.9 percent per year from 2015 to 2020. In particular, there are limits to how much higher the female labor force participation rate can rise after increasing to near the U.S. rate. This will be an unrelenting challenge for the Japanese economy as the 65 and over cohort is set to rise steadily and will only peak in 2055 when this group is projected to be 37 percent of the population.

The demographic trends are not nearly so dire in the United States, even with the aging of the baby-boom generation. The working age-population is still growing, with the UN projection of a 0.3 percent rate increase per year from 2015 to 2020. In addition, the aging is set to be much slower than in Japan, with the 65 and over cohort rising from 15 percent of the population to 22 percent by 2055, which will still be less than what it is in Japan today.

Preston Mui is a senior research analyst in the Bank's Research and Statistics Group.
Posted by Blog Author at 07:00:00 AM in Demographics, International Economics, Labor Economics, Macroecon

Very interesting write up. I think the Real GDP per capita chart is quite amazing in the context of QQE in Japan. If only they could create working aged adults as easily as central bank reserves (female participation rate aside). Thanks for drawing attention to this important topic.